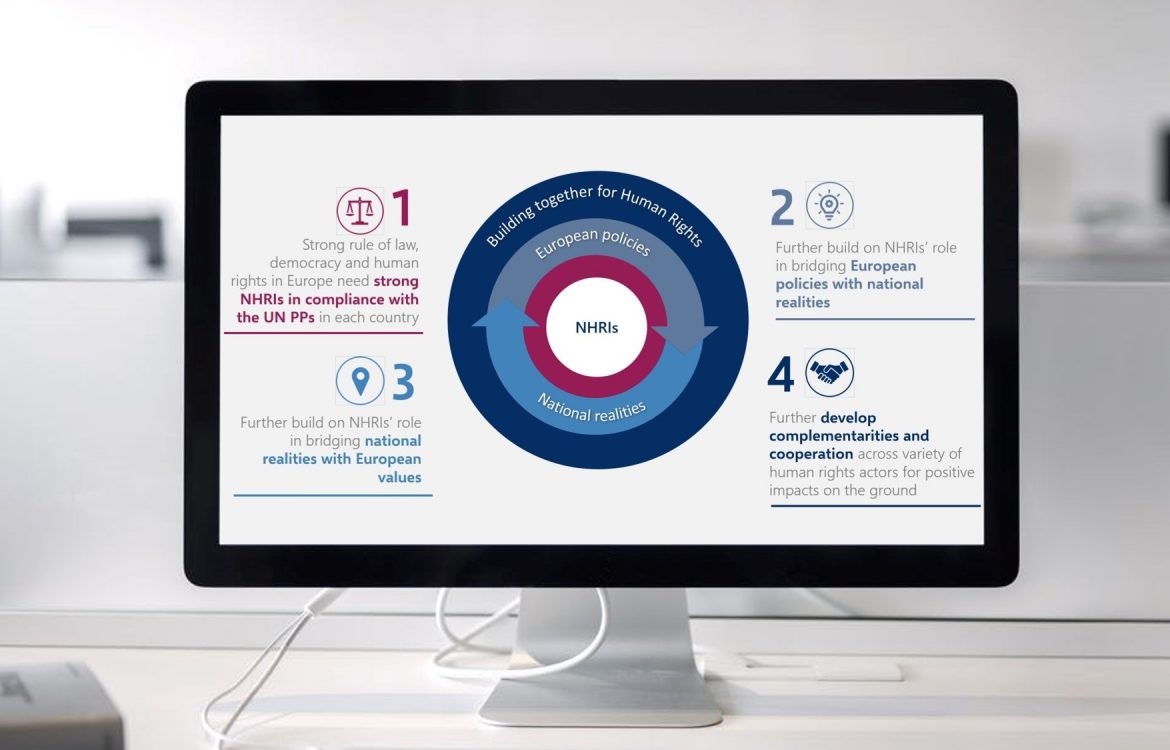 ENNHRI conference calls for collaboration with NHRIs for stronger human rights, democracy and rule of law in Europe

On 2 December, ENNHRI held its online Annual Conference, bringing together representatives of National Human Rights Institutions (NHRIs), European and international bodies and civil society to exchange on strategic engagement with NHRIs to strengthen human rights, democracy and the rule of law in Europe.

Opening the conference, Caroline Fennell, ENNHRI Chair and Commissioner at the Irish NHRI (Irish Human Rights and Equality Commission), stressed that it is a critical time to strengthen collaboration among NHRIs and regional bodies, given the ongoing human rights, democracy and rule of law challenges across Europe and the persisting impacts of the COVID-19 pandemic.

The event provided a space for exchange about opportunities for such collaboration. This includes opportunities for NHRIs stemming from newly adopted European policy tools to enhance human rights, democracy and the rule of law at the national level, as well as opportunities for regional bodies and civil society through strategic engagement with NHRIs and ENNHRI.

NHRIs’ impact at the national level

Joachim Herrmann, Member of the Cabinet of EU Commissioner Reynders, stressed the importance of NHRIs in promoting national-level debate around the European Commission’s first annual rule of law report and in cooperating with authorities to improve the implementation of the EU Charter of Fundamental Rights. Beate Rudolf, Director of the German NHRI (German Institute for Human Rights), called on the European Commission Representations in Member States to engage with NHRIs and organise public discussions on the rule of law report, ensuring effective follow-up on the challenges identified.

Strategic value of partnering with NHRIs and ENNHRI

All speakers spoke in favour of strengthening their cooperation with NHRIs (individually, and collectively though ENNHRI) due to the value they bring to both European and international organisations. A key takeaway was the crucial role of independent NHRIs in contributing valuable and credible information from the ground.

In the context of this discussion, Maria Gavouneli, President of the Greek NHRI (Greek National Commission for Human Rights), called for a closer institutional cooperation with the EU Agency for Fundamental Rights (FRA) to reinforce NHRIs’ institutional work and support the collection of field information to further influence policies.

Participants also acknowledged the essential role of NHRIs as interlocutors between the state and general public. Luisa Ragher, Head of Human Rights Division at the European External Action Service, stressed that NHRIs are a vital component in the institutional set up of the EU, especially in their function as a ‘bridge-builder’ between the government and civil society.

Participants also called for stronger protection mechanisms for human rights defenders at the EU and Council of Europe levels, following the example of the UN, especially in the context of increased attacks and challenges experienced during the COVID-19 pandemic. Nils Muižnieks, Amnesty International’s Regional Director for Europe, emphasised the need for more vigorous defence of human rights defenders by the EU, proposing to bring defenders together with different strands of EU engagement with a given country.

Reprisals also target NHRIs as human rights defenders. Michael O’Flaherty, Director of FRA, referred to key areas of particular concern – as identified in FRA’s new study on NHRIs – including physical threats and challenges to their independence and resources. An indicative example of such challenges was presented by Miroslaw Wróblewski from the Polish NHRI (Office of the Polish Commissioner for Human Rights), who elaborated on challenges faced by the Polish Commissioner in the current national context.

Against this background, the need for NHRIs’ independence to ensure the effective execution of their mandate was underlined by all participants. Birgit Van Hout from the UN Human Rights Office in Europe highlighted that independence is key to securing credible evidence in international monitoring mechanisms, while Christophe Poirel from the Council of Europe also emphasised the need to have independent NHRIs and encourage governments to establish institutions in compliance with the UN Paris Principles.

Another key takeaway from the conference was the need to strengthen the cooperation across different organisations and explore complementarities of existing mechanisms, towards enhancing the protection of human rights, democracy and the rule of law at the national and European levels.

Andreas Peschke from the German Foreign Office elaborated on efforts to create synergies between Germany’s simultaneous Presidencies in the Council of the EU and the Council of Europe. Nils Muižnieks from Amnesty International emphasised the importance of regional cooperation between the Council of Europe and the EU, encouraging the latter, as a future signatory to the European Convention on Human Rights, to pay special attention to judgments of the European Court of Human Rights in its foreign policy.

Katarzyna Gardapkhadze from ODIHR shared that cooperation across regional and international organisations would strengthen ODIHR’s effectiveness in supporting NHRIs, especially when they come under threat. This is evidenced by the example of the joint statement made in support of the Polish NHRI.

Finally, participants acknowledged the challenges posed by COVID-19 to human rights, democracy and the rule of law, including impacts on the effective operation of NHRIs. They called for even more vigilance in monitoring state measures and their compliance with international human rights standards. NHRIs’ role in ensuring a human rights-based approach to the COVID-19 recovery and their work in safeguarding human rights during the pandemic was also stressed.

Michael O’Flaherty from FRA drew attention to the socio-economic impacts of the COVID-19 crisis and stressed that it iscrucial to apply a human rights-based approach to the recovery plan, avoiding a repetition of mistakes following the 9/11 terror attacks, where human rights were absent in policy responses.

Participants agreed to further strengthen strategic cooperation between NHRIs and regional bodies. In line with the conclusions from ENNHRI’s preceding leadership webinars, regional and international actors should support independent NHRIs in compliance with the UN Paris Principles in order to effectively bridge national realities with European policies and values. Further development of complementarities and cooperation among actors is needed to achieve positive impacts on the ground.

In early 2021, the Committee of Ministers of the Council of Europe is expected to adopt its updated Recommendation on ‘the development and strengthening of effective, pluralistic and independent NHRIs’. ENNHRI will host a high-level webinar for exchange among NHRIs and regional actors on opportunities arising from this development, building on discussions at the Annual Conference.