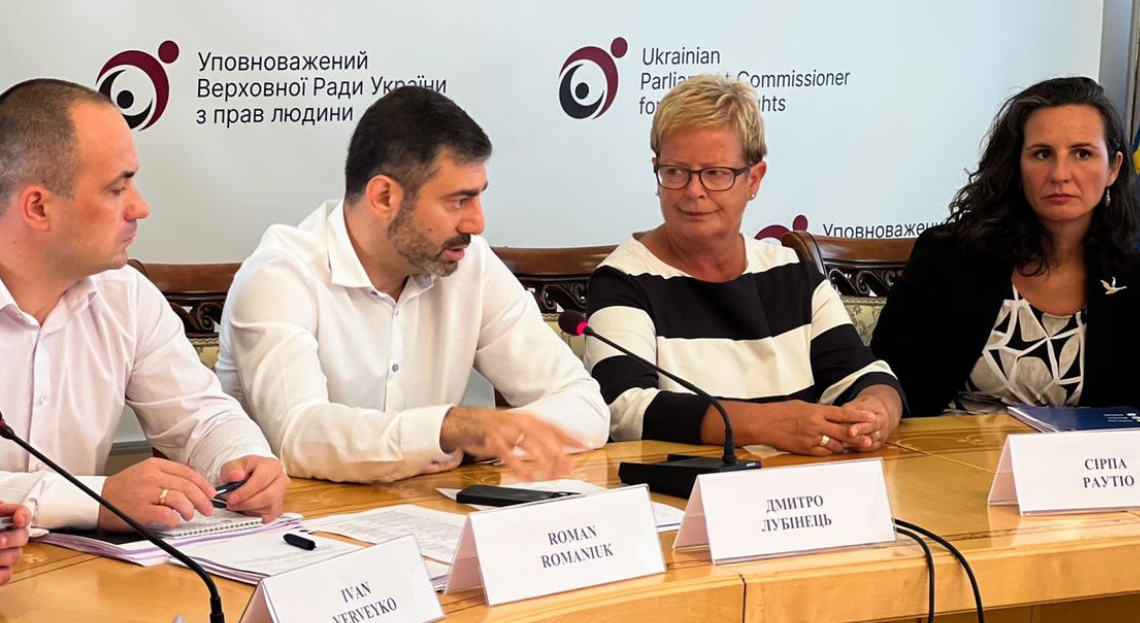 Supporting the Ukrainian NHRI – an ENNHRI delegation travels to Kyiv

On 20 to 23 August, an ENNHRI delegation visited Ukraine’s National Human Rights Institution (NHRI). The three-day mission, which included extensive discussions with Dmytro Lubinets, Ukrainian Commissioner for Human Rights, led to a greater understanding of the NHRI’s work, the challenges faced, and how ENNHRI might support its work to promote and protect human rights.

The delegation was personally accompanied by Dmytro Lubinets, the new Ukrainian Parliament Commissioner for Human Rights, for the duration of its mission, which included visits to the NHRI’s offices in Lviv and Kyiv, as well as areas severely impacted by the conflict. The delegation of ENNHRI’s Chair, Sirpa Rautio, and ENNHRI’s Secretary General, Debbie Kohner, also met with internally displaced persons (IDPs), the Speaker of the Ukrainian Parliament, and the Chairperson of the Human Rights Committee*.

The Commissioner has a vision for his five-year mandate, which involves strategic objectives to address the wide range of human rights abuses across the country. In order to ensure prompt local responses to the increased individual complaints received by the NHRI, the Commissioner foresees representation in each of Ukraine’s regions, including those currently occupied. Indeed, access from Kyiv has become impossible in some regions, as a result of active hostilities.

The NHRI will also establish expert civil society councils for each region, as well as for the Commissioner’s representatives working on key priorities, such as IDPs, the NPM, non-discrimination, and economic and social rights. The participation of civil society, as well as experts to address individual and structural human rights concerns, will help strengthen the institution and maximise its impacts in promoting and protecting human rights.

The ongoing war has resulted in higher levels of human rights abuses, and limited resources to address them. It is therefore vital that the Ukrainian NHRI receives sufficient resources to carry out its crucial mandate. As noted by the Chairperson of the Human Rights Committee in a meeting with ENNHRI and the Speaker of the Ukrainian Parliament, the NHRI is one of the most important institutions in Ukraine in these challenging times.

The delegation’s experiences will guide ENNHRI and European NHRIs in their future support for the Ukrainian NHRI and the wider human rights situation. Indeed, the working relationships built during the mission have laid the groundwork for even deeper cooperation.

Discover here how European NHRIs have already expressed solidarity and responded to human rights challenges emerging from the armed attack on Ukraine.