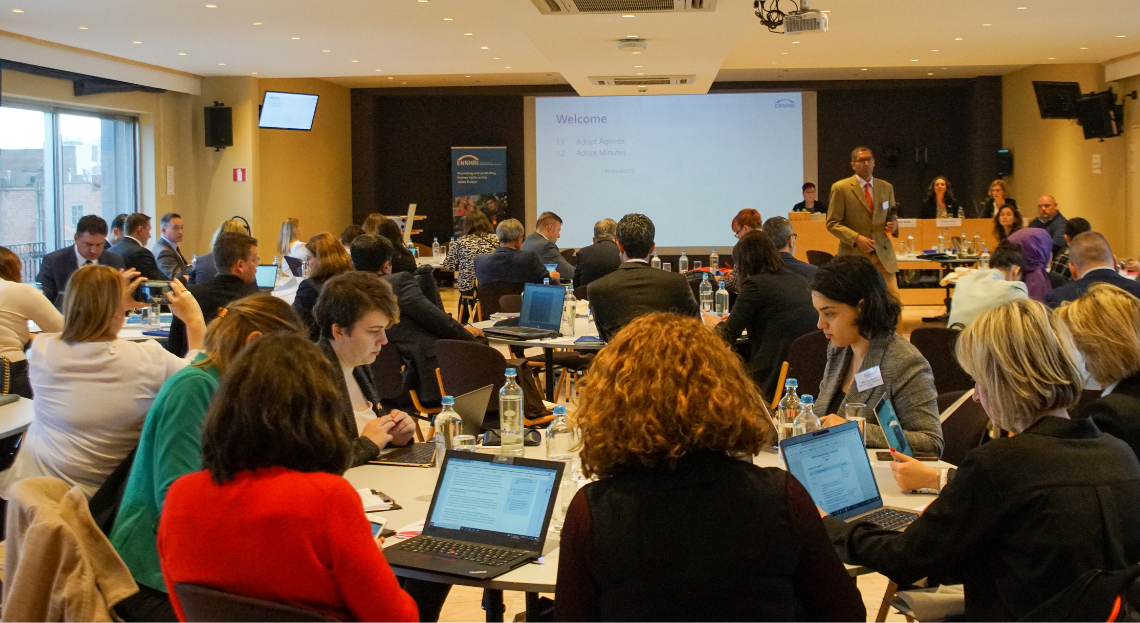 From 22-23 November 2022, ENNHRI held its first in-person General Assembly meeting since the onset of COVID-19. Over 80 representatives from 43 European National Human Rights Institutions (NHRIs) came together in Brussels to (re)connect and exchange on crucial governance and thematic matters. Thematic discussions looked at NHRI resilience and the human rights impacts of the war against Ukraine. The two days also featured a component focusing on NHRI leadership.

Gathering so many NHRIs, the General Assembly was the ideal forum to examine a variety of network matters – past, present and future. The meeting opened with an overview of ENNHRI’s progress in 2022. This included a summary of NHRI accreditation during a year in which several NHRIs were (re)accredited.

The focus then switched to the first of two thematic topics on the agenda: the human rights impacts of the war in Ukraine. To set the scene, participants heard about the in-country situation, including from Matilda Bogner, Head of the UN Human Rights Monitoring Mission in Ukraine. In subsequent discussions, NHRIs cited providing housing and ensuring labour market access for those fleeing Ukraine as being among major ongoing challenges. The risk of exploitation and human trafficking also remains high, with the energy and food crisis exacerbating the precarious situation many face. Regional solidarity and a common approach are crucial to addressing all these and other critical issues.

Participants also considered NHRI resilience, examining this from three angles: regional standards and their implementation; national rule of law environments; and supporting institutional resilience and NHRIs under threat. They reported how threats to NHRIs are common across the region – instances mentioned included smear campaigns – but that we should accept these as normal. At the same time, they reiterated the value of the Council of Europe Recommendation on NHRIs and the need to increase its visibility.

ENNHRI’s member groups sit at the heart of the network. Representatives from eight of them took centre stage to present their diverse activities, including ones in 2023. The General Assembly concluded by also looking towards the future. Members adopted ENNHRI’s Operational Plan 2023, which sets out key work for the year ahead.

The two days also featured a leadership component. Prior to the General Assembly, an induction saw NHRI leaders old and new (re)acquainting themselves with peers and hearing about how ENNHRI strengthens, connects and supports its members. A Leadership Forum session followed the meeting and gathered heads of NHRIs to share on crisis management models.

Furthermore, ENNHRI convened a meeting between the Ukrainian Parliament Commissioner for Human Rights, Dmytro Lubinets, and the Commissioner for Human Rights of the Russian Federation, Tatyana Moskalkova. They met to explore ways to work together on human rights and humanitarian issues arising in their states. Relive what happened by looking at the Twitter conversation from the two days.