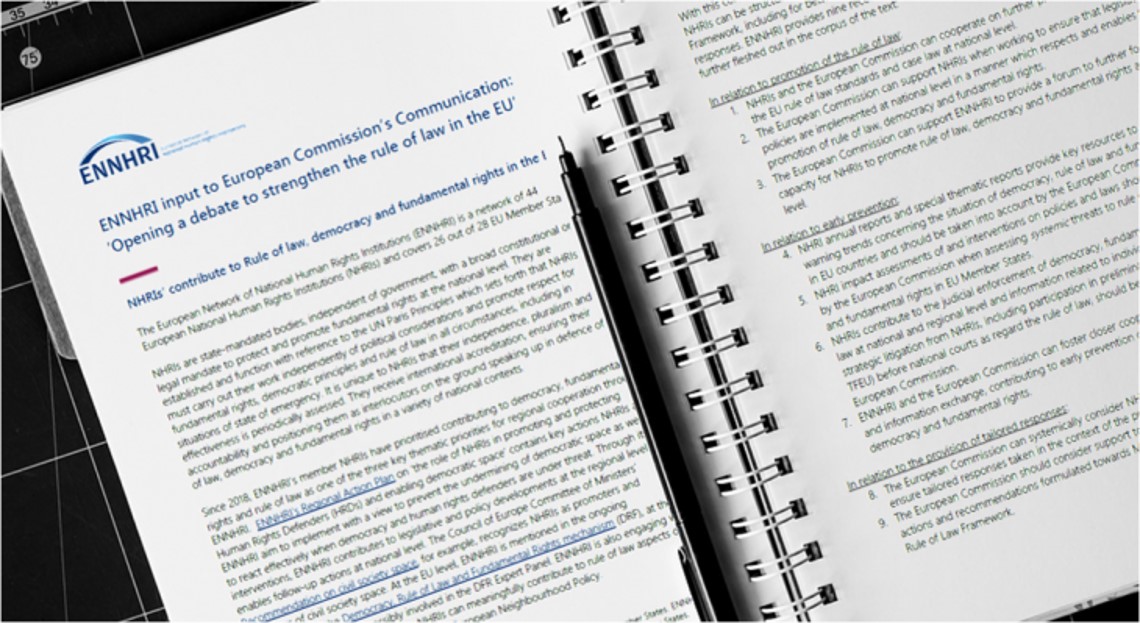 ENNHRI has made a submission to the European Commission (DG JUST) underlining how National Human Rights Institutions (NHRIs) can be structurally considered as partners in the context of the EU’s Rule of Law Framework. This comes in response to a communication from the European Commission, inviting stakeholders to input on how the EU’s rule of law toolbox could be enhanced.

The submission highlights the potential of NHRIs in contributing to the three pillars identified by the European Commission in its communication – ‘promotion’, ‘early prevention’ and ‘tailored response’. Each pillar closely relates to the work undertaken by NHRIs in Europe and the approach adopted in ENNHRI’s Regional Action Plan to promote and protect Human Rights Defenders and enable democratic space.

Promotion of the rule of law

The role of NHRIs and ENNHRI is also recognised in the context of the proposed enabling conditions for the next generation of the European Structural and Investment Funds, and is also echoed in a European Parliament report proposing the establishment of a Panel of Independent Experts that includes ENNHRI.

Relevance beyond the EU

All the actions proposed are equally relevant for NHRIs of EU and non-EU states, as the latter can contribute to the rule of law work of the Directorates-General for Neighbourhood and Enlargement Negotiations (DG NEAR) and International Cooperation and Development (DG DEVCO), as well as through Council of Europe mechanisms.

As part of the EU’s external action, the EU Action Plan on Human Rights and Democracy 2015-2019 highlights the importance of human rights compliance and respect for the rule of law, and clearly recognises the role of NHRIs. The drafting of the new Action Plan is ongoing, and ENNHRI has submitted a written contribution to the European External Action Service highlighting the importance of considering NHRIs.

Building on the stakeholder’s reflection process and ongoing debates in the EU on this topic, the European Commission is foreseen to publish its own conclusions and proposals on how to strengthen the rule of law in the EU in June 2019.