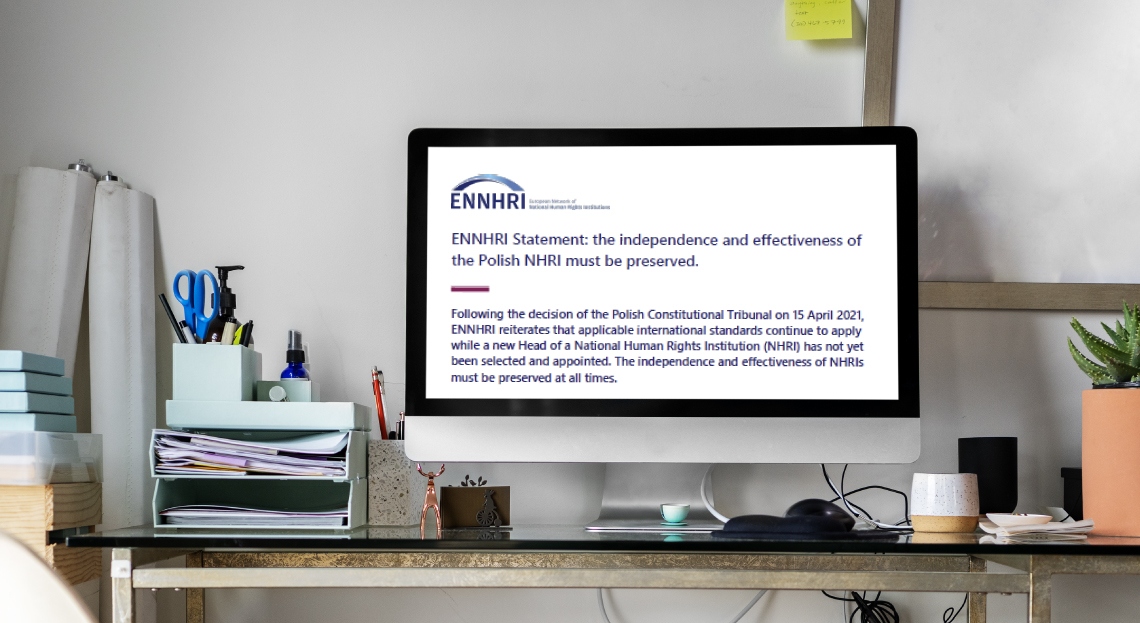 The independence and effectiveness of the Polish NHRI must be preserved

Following the decision of the Polish Constitutional Tribunal on 15 April 2021, ENNHRI reiterates that applicable international standards continue to apply while a new Head of a National Human Rights Institution (NHRI) has not yet been selected and appointed. The independence and effectiveness of NHRIs must be preserved at all times.

On 15 April 2021, the Polish Constitutional Tribunal found Article 3.6 of the Law on the Office of the Polish Commissioner for Human Rights (Polish NHRI) to be unconstitutional. Pursuant to that provision, an outgoing Polish Commissioner for Human Rights (the Commissioner) was able to perform his or her duties until a new Commissioner had taken up the position. The Tribunal ruled that the provision shall cease to apply after three months from 15 April 2021, the date of publication of the judgment in the Journal of Laws of the Republic of Poland.

Despite attempts following the prescribed procedure, a new Commissioner has not been selected for the position at the time of writing. Following the ruling of the Constitutional Tribunal, the Polish NHRI will be operating without a Commissioner in three months, unless a new person is selected before that. However, the three Deputy Commissioners are fully entitled, according to jurisprudence, to fulfil all the Commissioner’s duties during the time of vacancy.

The Polish NHRI is internationally accredited with A-status, indicating its full compliance with the UN Paris Principles. ENNHRI stresses the importance of guaranteeing that the NHRI can continue to work in an independent and effective manner. The SCA may initiate a Special Review where it appears that the circumstances of an NHRI may have changed in a way that affects compliance with the UN Paris Principles.

ENNHRI calls on all Poland’s actors involved in the selection and appointment of the new Commissioner to further enhance their efforts in accordance with the present legal provisions. They must seek to identify a candidate with broad political and societal support, through a clear, transparent, merit-based and participatory process, which would ensure the independence, credibility, and effectiveness of the institution.

As recommended by the Council of Europe Committee of Ministers, States could draw on technical assistance such as that from ENNHRI and regional and international bodies to build on existing best practice to maintain and strengthen NHRIs. Therefore, ENNHRI offers its support and advice to all relevant stakeholders in Poland on how the selection and appointment of a new Polish Commissioner for Human Rights can be ensured in full consideration of international standards and reflecting on regional practices.

» Read the Statement in Polish