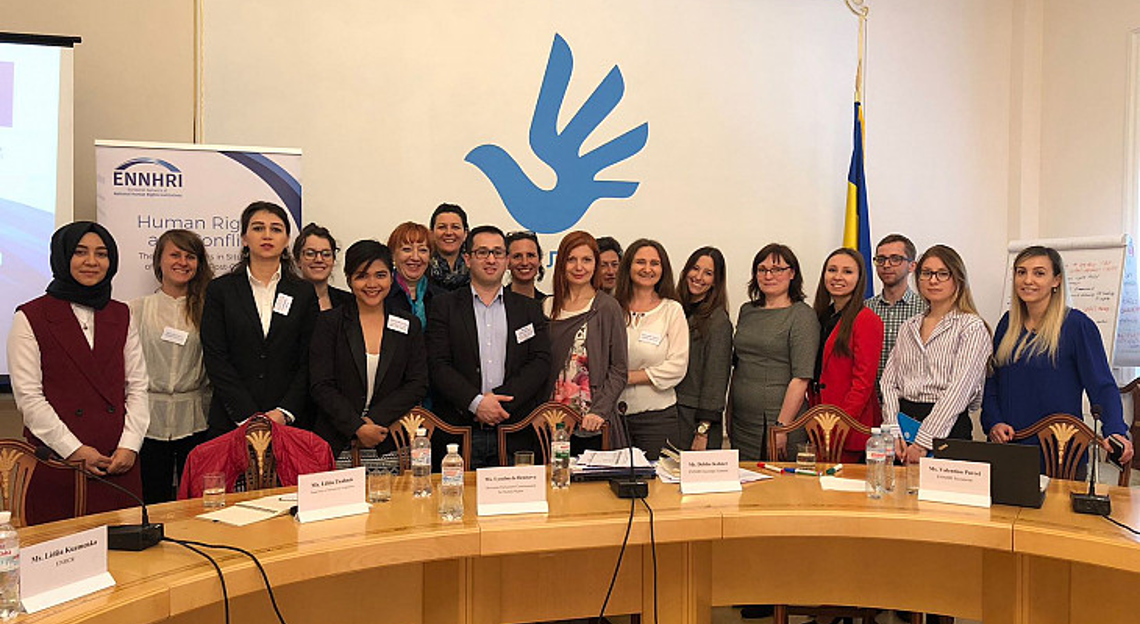 The human rights of Internally Displaced People (IDPs) in (post) conflict situations: what role for NHRIs?

Within the context of its project on ‘The Role of NHRI’s in Situations of Conflict and Post-Conflict’, ENNHRI has organised between 23 and 27 April in Kyiv, Ukraine a series of events focused on the role of NHRIs in promoting and protecting the human rights of Internally Displaced People (IDPs) in (post) conflict situations.

Over the last decade, conflicts and violence in the wider Europe have forced thousands of people to flee their homes, often leading to large-scale internal displacement, and to massive human rights violations. The national human rights Institutions (NHRIs), as key actors within the national human rights system, play an important role on IDPs protection. Aiming to deepen the understanding of and raise awareness of NHRI’s role, ENNHRI organised two major events in Kyiv, Ukraine: a Capacity Building Workshop on 23-25 April 2018 and a Multi-stakeholder Regional Meeting on 26-27 April 2018.

These events brought together ENNHRI members, NHRIs operating in (post) conflict context in the wider Europe and other regions, international and regional stakeholders, civil society and national actors. Participants explored the role of NHRIs on IDPs protection, and discussed further engagement on human rights promotion and protection of IDPs.

“NHRIs are at the front line at the national, regional and international level to promote & protect human rights of IDPs; well placed to advise on legislation, engage with all actors, contribute to setting up durable solutions” said the UN Special Rapporteur on the human rights of IDPs, Cecilia Jimenez-Damary, who attended the event in Kiev.

The Special Rapporteur also confirmed that the 2019 report on IDPs to the UN Human Rights Council will be dedicated to the role of NHRIs.

Both events will facilitate the development of a platform for dialog and engagement with representatives of various regional organisations: the EU, CoE and UN.

Participants have also set the basis of a draft Statement on the Role of NHRIs to Promote and Protect the Human Rights of IDPs in (Post) Conflict 2018, which will be shared for comments with the ENNHRI members and partner organisations.