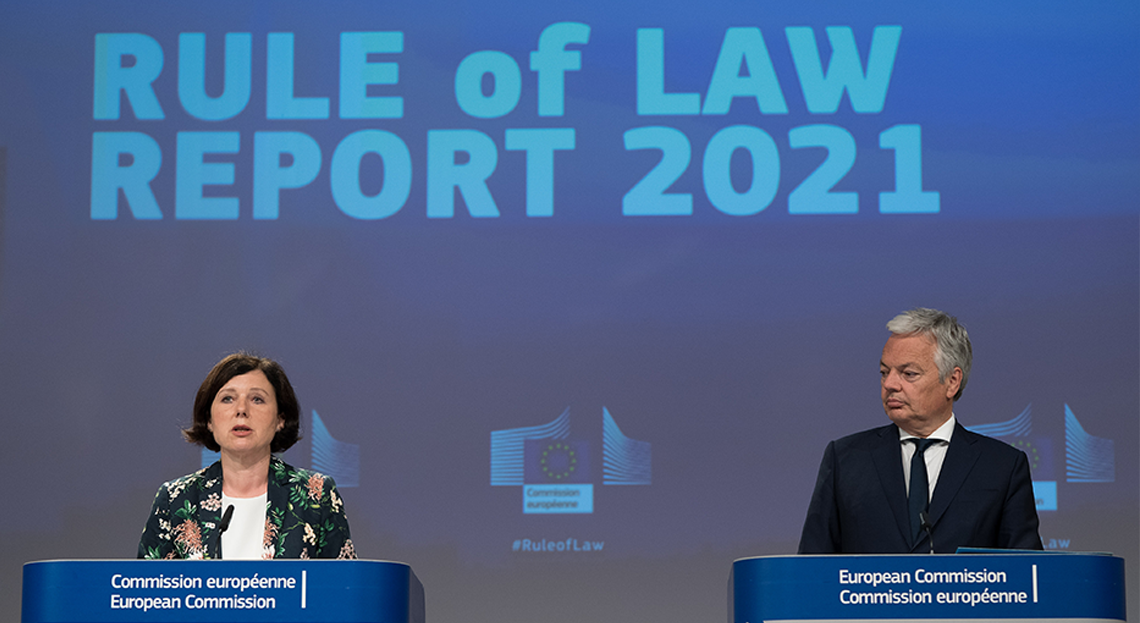 The European Commission’s 2021 Rule of Law report illustrates trends and challenges to the rule of law in the EU and presents an overview of the situation in each Member State, highlighting the importance of NHRIs at national and regional levels.

The European Commission has published its second report assessing the rule of law situation in EU Member States, recognising the important role of National Human Rights Institutions (NHRIs) and referring to their contributions through ENNHRI.

It comes just weeks after the European Parliament issued its report on the Commission’s 2020 Rule of Law Report, in which the Parliament “recalls the importance of independent national human rights institutions…in preserving EU citizens’ rights and being able to defend the rule of law at national, regional and local levels.”

As in 2020, the Commission’s report is built upon four pillars: justice systems, anti-corruption framework, media pluralism and freedom, and other institutional issues linked to checks and balances. It includes a specific section highlighting the key role of the Ombudsperson and NHRIs, including “defending the right to good administration and fair treatment, and pointing to violations of fundamental rights.”

Chapters focusing on individual Member States provide an update on the situation regarding NHRIs for the country in question, including establishment, accreditation status and role. The Commission also refers to the work of NHRIs in its analysis of the impact of the COVID-19 pandemic on checks and balances, for instance in France, Lithuania and Ireland.

In recent months, various EU institutions have taken into account the collective contribution of ENNHRI members to EU Rule of Law reporting. For example, the report of the Parliament on the Commission’s 2020 Rule of Law report calls on the Commission to strengthen dialogue with NHRIs and pay greater attention to threats to their independence, echoing the policy recommendations included in ENNHRI’s report on the rule of law in the EU.

The European Economic and Social Committee’s Fundamental Rights and Rule of Law Group has also recently published ENNHRI’s contributions to the EU’s Rule of Law monitoring cycle for 2020 and 2021 on their website, which is used in the context of the EESC’s country visits.

The Commission’s 2021 report on the rule of law in EU Member States provides an important basis for ENNHRI members to engage in national follow up based on the challenges identified. It will also provide an opportunity for members to engage with state representatives involved in relevant upcoming debates in the European Parliament, as well as the annual rule of law dialogue in the EU Council, which according to protocol order will cover Croatia, Italy, Cyprus, Latvia and Lithuania in the second half of 2021.

» Learn more about the Commissions’ 2020 Rule of Law report