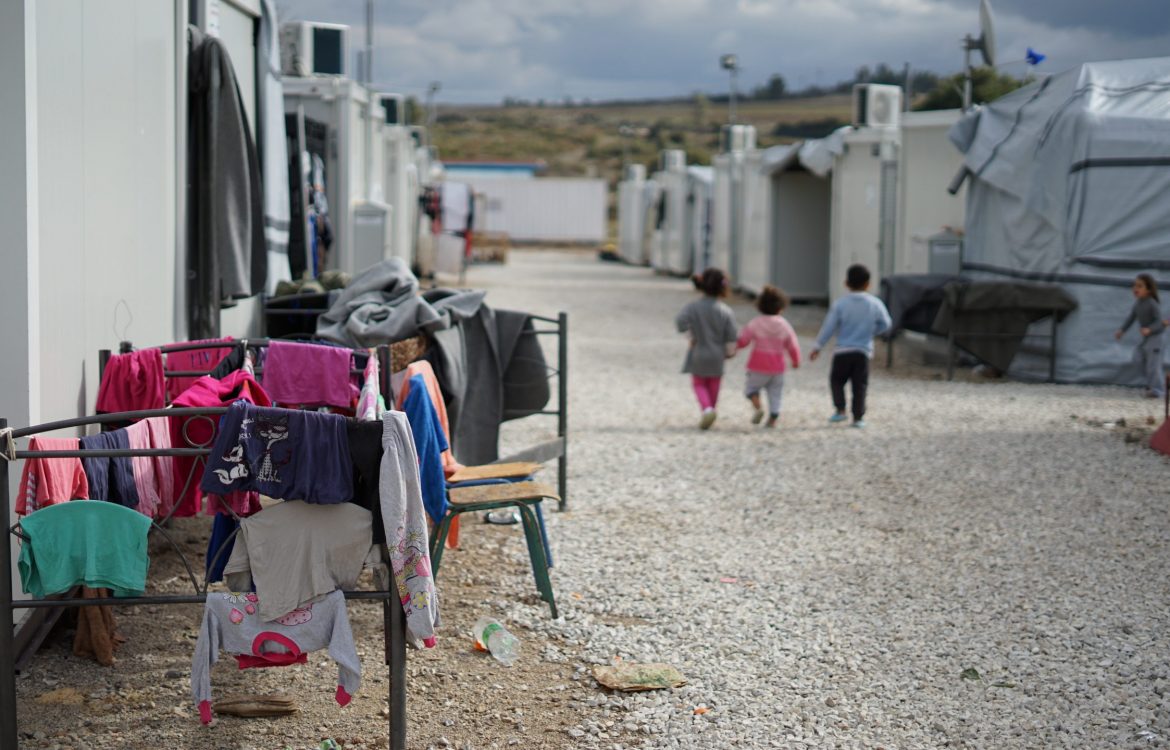 Role of NHRIs in monitoring, reporting and protecting migrants’ rights at borders highlighted at High-level Conference

On 2 and 3 June, ENNHRI held an online High-Level Event bringing together Head of National Human Rights Institutions (NHRIs) and migration experts, partners from international organizations, national governments, civil society organisations and academia to discuss the role of NHRIs in ensuring respect for the human rights of migrants at borders.

NHRIs play a key role in ensuring that the human rights of migrants are respected, including at borders. This role has been recognised by a variety of actors, such as the European Parliament and the Council of Europe Committee of Ministers.

This online High-Level Meeting provided a space to exchange about the key added value of NHRIs in promoting and protecting the human rights of migrants at European borders, identify opportunities for stronger cooperation between NHRIs, regional stakeholders and NGOs and discuss recommendations to national and regional authorities based on ENNHRI’s reports on migrants’ rights at borders.

With Asylum & Migration being one of the thematic priorities for the network, ENHHRI has strengthened the work of NHRIs to promote and protect the rights of migrants at borders since 2019, publishing several resources, such as:

» Explore the resources in the interactive page

In addition, five NHRIs – from Croatia, France, Greece, Serbia and Slovenia – have developed national monitoring reports with the result of their human rights monitoring at borders, which will converge into a comparative regional report.

During the event, Eva Tzavala, ENNHRI’s Asylum and Migration Working Group Chair and Legal Officer at the Greek NHRI (Greek National Commission for Human Rights) presented the preliminary findings of this report, highlighting how human rights violations at borders persist amid a climate of impunity and a lack of effective investigations. Building on national reports and findings from NHRIs across Europe, the comparative regional report will include common trends, exchange of good practices and challenges, as well as policy recommendations linked to regional developments, such as the EU Pact on Migration and Asylum

During this panel session, moderated by Maria Gavouneli, Head of the Greek National Commission for Human Rights, participants shared their views on the key added value of NHRIs in promoting and protecting the human rights of migrants at European borders and how to strengthen cooperation to ensure human rights-compliant practices at borders.

Building on the existing collaboration with NHRIs across the world, Angela Li Rosi, Deputy Director of the Regional Bureau for Europe at the UNHCR identified two areas for strengthened cooperation with European NHRIs: pushbacks and the establishment of the independent national monitoring mechanism (INMM). While NHRIs can contribute to collect evidence on pushbacks, including in the context of strategic litigation, they can also play an important role in ensuring a truly independent and effective INMM.

Henrik Nielsen, Head of Unit for Asylum, DG HOME, European Commission stressed that the European Commission has recognised the important role of NHRIs in the context of strategy on implementing the European Charter of Fundamental Right and remains open to further cooperation in the field of asylum and migration. He acknowledged that NHRIs can be relied upon in the establishment of the new INMM, especially where they already conduct the monitoring. Finally, the European Commission encourages NHRIs to engage more at the capital level and with the EU Justice and Home Affairs Agencies, especially the Consultative Forums of EASO and Frontex.

The important role of NHRIs in A&M, both at the international and European levels, is well recognised by OHCHR, as reminded by Birgit Van Hout, Regional Representative for Europe at the OHCHR. OHCHR especially encourages NHRIs to take an all-encompassing approach to asylum and migration, with special attention to vulnerable groups. OHCHR also invites the EU to rely more on NHRIs, taking the international level as a blueprint, and to call upon EU Justice and Home Affairs agencies to closer engage with them.

Creating an enabling environment for NHRIs and other human rights defenders when monitoring, promoting and protecting human rights at the borders

This panel session, moderated by Tena Šimonović from the Ombudswoman of the Republic of Croatia, discussions revolved around the creation of an enabling environment for NHRIs and other human rights defenders when monitoring, promoting and protecting human rights at borders.

MEP Tineke Strik (EFA/Greens) believed that the shrinking space for civil society working in the field of asylum of migration is a Rule of Law issue; an assessment of ability of human rights defenders (HRDs) to work in an enabling environment in every Member State should feature in the conditionality mechanism and EU funding on asylum and migration. While recognizing that the European Commission should do more to protect HRDs, she encouraged national bodies, including NHRIs, to use the complaint mechanism more vigorously. She also acknowledged the potential role of NHRIs in providing information under the new Schengen Evaluation and Monitoring Mechanism. Finally, the MEP suggested that an integrated external monitoring mechanism may monitor both the activities of the Member States and Frontex in the context of border management.

Nils Muiznieks, Europe Regional Director at Amnesty International expressed deep concern on the increasing threats and challenges faced by HRDs, especially those most vulnerable like NGOs. The absence of NHRIs in some countries, like Italy and Malta, as well as the challenges faced by some NHRIs are seen as important gaps. Amnesty International especially recommends better cooperation between NHRIs and prosecutors to stop impunity at borders, as well as the adoption of due diligence policies when NHRIs cooperate with third countries.

Inma Vazquez, Médecins Sans Frontières (MSF) Representative to the EU and NATO expressed particular concern on the criminalisation of humanitarians in the context of SAR operations. While regretting that the European Commission is not doing enough to save lives, MSF is open to explore possibilities to better cooperate with NHRs particularly on information-sharing to reach more people in need of assistance.

During this session, moderated by Beate Rudolf, Director of the German Institute for Human Rights, participants discussed the development of policy and legislation at the regional level and its implementation to uphold the human rights of migrants at borders

NHRIs, but also many NGOs, agree that there is a gap between the information collected and recommendations made, and the way national and regional authorities rely (or not) on such inputs when formulating policies and legislation that will impact on the ground. The current negotiations for the EU Pact on Migration and Asylum provide an opportunity for bridging this gap, provided that information and recommendations from human rights defenders (including NHRIs) are duly taken into account. Advancing on the negotiations of the Pact and on the Schengen’s reform is one of the priorities of the upcoming Slovenian Presidency of the Council of the EU, along with ensuring the implementation of the 2019 Frontex Regulation and improving the interoperability of IT info systems, as illustrated by Petra Maroša, JHA Counsellor for visas and borders at the Permanent Representation of the Republic of Slovenia to the EU.

While acknowledging the serious allegations brought to the table by HRDs, Matthias Oel, Director for Schengen, Borders and Innovation, DG Home, European Commission stressed the complexity of border management and pointed to the primary responsibility of states as well as the European Commission’s practical and structural limitations (lengthy infringement actions, evidentiary challenges, lack of investigative powers).

On the topic of ensuring the independence of monitoring mechanisms at borders, Milena Zajović of the Border Violence Recording Network, an initiative of grassroots organisations in the Balkan region which has gathered an impressive number of testimonials of pushbacks and violence in the region, was critical of the ‘pilot’ mechanism established by the Croatian Ministry of Interior in cooperation the European Commission and advocated for an INMM led by NHRIs in collaboration with stakeholders, funded by the European Commission but independent from national governments.

Eva Tzavala of the Greek NHRI called on the European Commission to establish a more institutionalised partnership with NHRIs, building on the CoE framework, the successful EU-NHRI engagement in the context of the Rule of Law mechanism, and the recognition of NHRIs’ work at borders by the European Parliament. The setting of EU binding standards for independent and strong NHRIs in each Member State, in the wake of the recent adoption of a Recommendation of the Committee of Ministers of the Council of Europe setting strong standards for European NHRIs, would represent an important step to address the existing gaps and ensure the follow up of the recommendations made by NHRIs to their national governments, including in the field of the human rights compliance of border management.

In the final high-level panel, moderated by Erinda Ballanca, Head of the People’s Advocate of Albania, NHRIs and other human rights defenders can contribute to a growing body of evidence indicating the existence of widespread violations of migrants’ human rights at the borders in Europe and advise governments and parliaments on how to achieve human-rights compliant legislation, policy and practices affecting migrants’ rights at the borders.

The Spanish NHRI, represented by the Director of International Relations, Carmen Comas-Mata Mira, presented a report on the situation of migrants in the Canary Islands, with the results of monitoring activities during on-site visits and recommendations to national authorities.

The report has been welcomed by Adriano Silvestri, Programme Manager on Asylum and Migration, EU Fundamental Rights Agency (FRA), who has encouraged NHRIs to use the existing fundamental rights framework provided by EU law to trigger positive change at national level.

Catherine Wollard, Secretary General of the European Council on Refugees and Exiles (ECRE) also believes that NHRIs can have a key role to strengthen the advocacy on regional frameworks at capital level, particularly by monitoring the correct transportation and implementation of the EU asylum acquis and funding. Another priority area for NHRI engagement is the execution of judgements of the European Court of Human Rights. NHRIs could also play a role in counterbalancing the external dimension of the EU policy, by increasing NHRI cooperation across the external borders.

Meaghan Fitzgerald, Acting Head of Democratization Department, OSCE-ODIHR invited NHRIs to request ODIHR legal opinions on new draft legislations, while pointing to access to justice as an area for stronger cooperation between NHRIs, ENNHRI and ODIHR.

Moving ahead: respecting human rights of migrants at borders

In closing the event, ENNHRI’s Secretary General, Debbie Kohner, reminded that cooperation is key for achieving real impact on human rights promotion and protection at borders. ENNHRI’s upcoming Regional Report will highlight key findings from NHRIs’ findings and explore lessons learned that can inform ongoing discussions on regional legislative and policy proposals on this field.