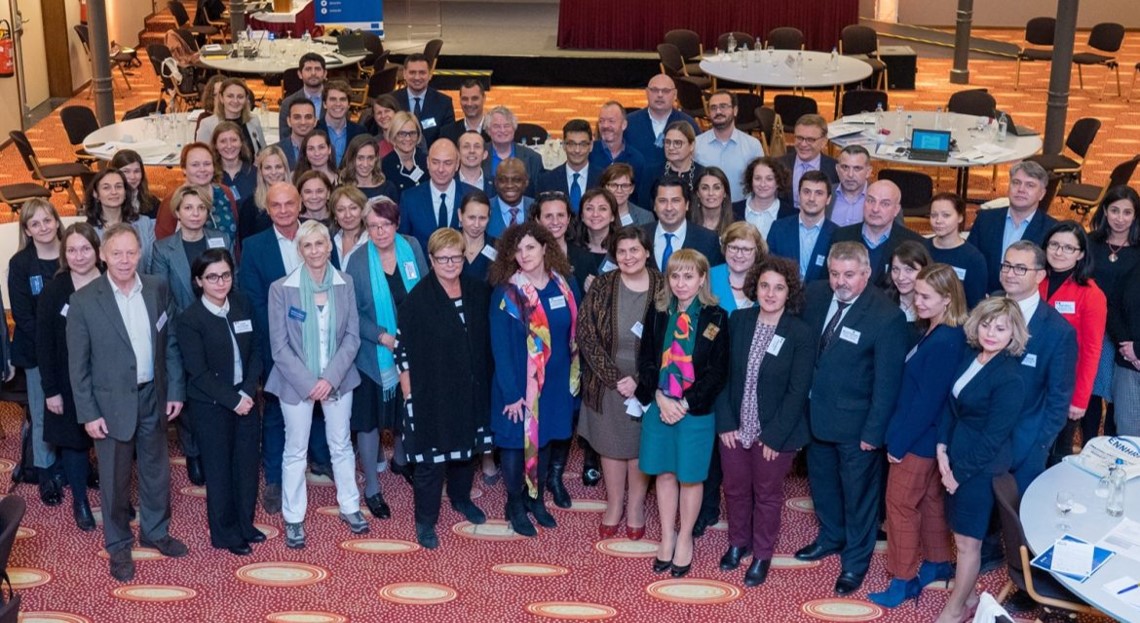 On 14 November 2019, ENNHRI’s Annual Conference in Brussels brought together European National Human Rights Institutions (NHRIs), regional and international organisations, and civil society to explore the role of NHRIs in realising economic and social rights (ESR) in Europe. The conference highlighted NHRIs’ important work in this area, with the launch of an NHRI Exposition and new publications and resources on the topic.

The conference programme included high-level panels and interactive small group discussions, with a focus on poverty, the right to housing, labour rights, justiciability and communication of ESR.

The conference highlighted a number of key examples of how NHRIs can work to enhance the realisation of ESR in their national contexts.

Work with international and regional bodies
Work with the state
Work with civil society, Human Rights Defenders, rights-holders and the media

An interactive online page was launched at the conference, illustrating how NHRIs use their broad human rights mandate and a variety of functions to advance the enjoyment of ESR in Europe.

Some of these practices were put on display at the conference through an NHRI Exposition, with posters showcasing an ESR issue faced at the national level, NHRI action taken and the impact achieved. The Exposition allowed European NHRIs to exchange and learn from each other’s work.

Watch NHRI participants present their ESR work at the Exhibition:

At the beginning of the day, Philip Alston, UN Special Rapporteur on extreme poverty and human rights, delivered a video statement, emphasising the importance of adopting an expansive definition of NHRIs’ role to include ESR alongside civil and political rights. He also stressed the need to address specific ESR challenges in the context of climate change and the digital era.

This panel session, moderated by Tena Šimonović Einwalter, Chair of Equinet and Deputy Ombudswoman of Croatia, focused on international and regional legal and policy frameworks to advance ESR protection and the role of NHRIs in helping realise them at the national level.

Michael Windfuhr, member of the UN Committee for Economic, Social and Cultural Rights (UN CESCR), spoke about the committee’s engagement with NHRIs. The UN CESCR monitors the implementation of the International Covenant on Economic, Social and Cultural Rights and advises members states, civil society and NHRIs on the specificities of this implementation through its General Comments, statements and open letters. Michael Windfuhr said that NHRIs can engage with the UN CESCR by monitoring the implementation of its concluding observations in accordance with available resources, dealing with cases through the individual complaints mechanism, and making third-party interventions as amicus curiae.

François Vandamme, Vice President of the European Committee of Social Rights (ECSR), spoke about the ESCR’s methods of work. At the European level, the ESCR oversees the implementation of the European Social Charter. Although the Committee does not directly enter into dialogue with state parties, it encourages NHRIs and civil society to provide spontaneous interventions through the national reports system and collective complaints procedure.

Katarina Ivanković-Knežević, Director for Social Affairs at DG EMPL (European Commission), highlighted the efforts of the new Commission in focusing more on social rights. This is shown in the portfolio of the new Commissioner-designate of ‘Jobs and Social Rights’, who will develop a comprehensive plan of action to implement the European Social Pillar at the EU and national levels. Moreover, she underlined the EU’s obligations under the UN Convention on the Rights of Persons with Disabilities and the EU Charter of Fundamental Rights.

Cecilia Forrestal, Human Rights Coordinator of the Irish Community Action Network, and Debbie Mulhall, Community Development Worker at Dolphin House, stressed the importance for NHRIs to work with people living in poverty to translate international human rights standards into practice. They called on NHRIs to stand in solidarity with rights-holders and give practical support, such as through grants and resources. Both speakers were involved in the ECSR case of FIDH v. Ireland concerning the right to adequate housing.

During this session, moderated by Allison Corkery from the Center for Economic and Social Rights, ENNHRI members from Belgium, Georgia, Latvia and Scotland shed light on the ESR situation in their countries and highlighted how they use their mandate to tackle existing challenges.

Nino Lomjaria from the Georgian NHRI (Public Defender of Georgia) explained her institution’s complaints-handling work, highlighting that over 20 per cent of people in Georgia live below the absolute poverty line. For example, the NHRI has issued recommendations related to the right to health in rural areas and safety in the workplace and engaged in a complaint to the constitutional court related to the right to pensions of war veterans.

Juris Jansons of the Latvian NHRI (Ombudsman of Latvia) said that complaints to the constitutional court and engagement with the media are useful tools for his institution. However, he also referred to the challenges of convincing national authorities to view ESR issues as human rights issues and to bring ESR treaties to life.

Judith Robertson from the Scottish NHRI (Scottish Human Rights Commission) underlined that ESR are a priority for her institution and spoke about their work on human rights budgeting and bringing rights-holders and duty-bearers to the same table. She also spoke about the NHRI’s work to engage people in a conversation about ESR in the context of Scotland’s National Action Plan for Human Rights.

In this panel discussion, moderated by Erinda Ballanca, People’s Advocate of Albania, the speakers stressed the importance of adopting a human rights-based approach to economic and social policies in relation to different ESR topics. This was followed by small group discussions, where participants explored challenges, actions and concrete proposals in addressing these issues.

Olivier de Schutter, Professor at Université Catholique de Louvain, introduced key principles on applying a human rights-based approach to poverty reduction and measurement, as outlined in ENNHRI’s new Guide for NHRIs. The Guide is based on an extensive study conducted for ENNHRI, which discusses how NHRIs can advocate for poverty as a multidimensional issue.

In a video message, Leilani Farha, the UN Special Rapporteur on Right to Housing, spoke about the work of European cities, such as Amsterdam, Barcelona, Berlin, Copenhagen, Geneva, Ghent and Malmö, which are participating in her global Shift initiative, aiming to reclaim housing as a human right. In her view, NHRIs are crucial to providing human rights guidelines for businesses involved in the housing sector, engaging with municipalities and advising the state on a human rights-based approach to housing policies.

A small group discussion on the right to housing was moderated by Maria José Aldanas (Coordinator Housing Rights Watch & FEANTSA).

François Vandamme, Vice-President of the European Committee of Social Rights, spoke about labour rights challenges in Europe, framing his presentation around the European Charter of Social Rights and mentioning the importance of also considering other instruments. He explained that labour rights historically constitute an important part of the Charter and that the European Court of Human Rights plays an important role in recognising the role of trade unions, social partners and civil society in protecting these rights.

A small group discussion on labour rights was moderated by Mirosław Wróblewski (Head of the Constitutional, International & European Law Department, Office of the Polish Commissioner for Human Rights).

Katarzyna Gardapkhadze, First Deputy Director of the OSCE Office for Democratic Institutions and Human Rights, outlined important principles for framing the discussion around ESR in Europe. These included: the notion of universal, indivisible, interdependent and interrelated human rights; the interconnectedness of all human rights; democratic societies being built on citizens’ participation; participatory budgeting and budgets that focus on the fulfilment of human rights; engagement with businesses and their corporate responsibility; and cooperation in broad coalitions.

Branko Lubarda, Judge at the European Court of Human Rights, presented a history of how the Court’s case law helped to broaden its interpretation of the European Convention of Human Rights in relation to ESR. He emphasised the concept of ‘human dignity’ as an engine for the incorporation of ESR in Court decisions. He also highlighted that ESR can be directly protected through the Article 4 on the prohibition of slavery and forced labour, Article 11 on freedom of assembly and Article 12(1) on the right to education.

A small group discussion on the justiciability of ESR was moderated by Sirpa Rautio (Director, Finnish Human Rights Centre).

ESR on the human rights agenda in Europe

In the final high-level panel, moderated by Maria Gavouneli, President of the Greek National Commission for Human Rights, speakers reflected on the standing of ESR on the human rights agenda in Europe. They agreed that, despite the universality and indivisibility of all human rights, ESR are still underrepresented and gaps in their protection persist.

Eamon Gilmore, EU Special Representative for Human Rights, highlighted that that the human rights dimension must be a part of all of the EU’s external action, including its trade agreements and development policies. Further, he underlined that the European External Action Service supports the establishment of NHRIs where they do not exist or where they are struggling, looking to the expertise and knowledge of strong NHRIs in doing so.

Birgit Van Hout, the Regional Representative for Europe at the Office of the UN High Commissioner for Human Rights (OHCHR), added that, not only do ESR tend to be separated from civil and political rights in Europe, but that it is often overlooked that ESR can offer good indicators for unrest and conflict in society. She referred to an OHCHR report on Early Warning and Economic and Social Rights, which was produced in light of this issue.

Nina Nordström, Representative of Finland’s Presidency of the EU Council and Head of Mission at Finland’s Permanent Representation to the Council of Europe, underlined the challenge of how the rule of law can be impacted when ESR are undermined. Accordingly, the Finnish Presidency has focused in its programming on both the rule of law and social inclusion, and concentrated on the role independent bodies such as NHRIs in this regard.

In summing up the conference discussions, Debbie Kohner, Secretary-General of ENNHRI, stressed the importance of a human rights-based approach in addressing ESR, which was underlined throughout the day. This includes principles such as the implementation of human rights standards, including non-discrimination, the participation of individuals impacted by ESR violations, transparency in human rights budgeting work, and accountability through the justiciability of ESR. In addition, two important principles were highlighted: effective communications to empower rights-holders and win the ‘hearts of minds’ of duty bearers, and cooperative partnerships to realise ESR.

She also stressed that ENNHRI’s members stand in solidarity with each other and their partners in advancing ESR in Europe, and that all of the messages and proposals from the conference will be taken into account in ENNHRI’s work across all thematic areas.

New publications on ESR were launched at the conference.

A new NHRI Guide on ‘Applying a Human Rights-Based Approach to Poverty Reduction and Measurement’ outlines 7 principles for advancing a human rights-based approach in this area and illustrates how European NHRIs already adopt this approach.

A new report on migrants’ access to ESR provides an overview of the challenges faced by migrants when seeking to enjoy their ESR, and examples of how NHRIs use their mandate to address these challenges.

A new infosheet showcases how NHRIs in Europe use their mandate to promote and protect ESR in situations of (post-)conflict. It includes practices from the NHRIs of Bosnia and Herzegovina, Croatia, Serbia and Northern Ireland.