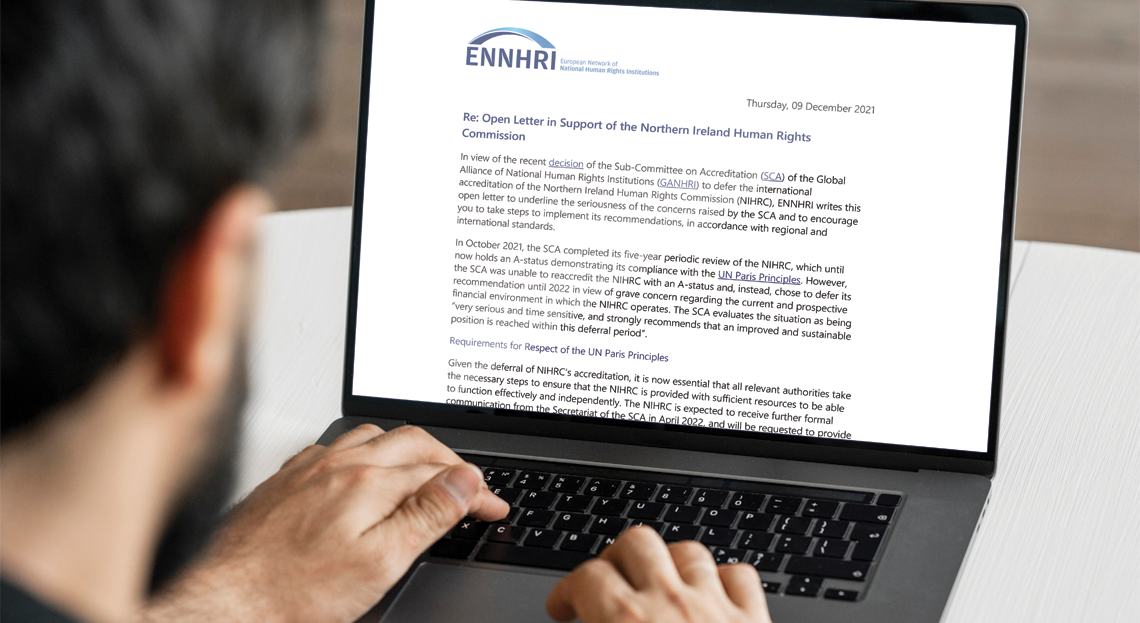 ENNHRI calls for action to support the Northern Irish NHRI

At its most recent session, the Sub-Committee on Accreditation (SCA) of the Global Alliance of National Human Rights Institution (GANHRI) deferred the re-accreditation of the Northern Ireland Human Rights Commission (NIHRC) due to concerns over insufficient funding. In response, ENNHRI has written an open letter in support of the NIHRC to relevant authorities, underlining the SCA’s concerns and calling for swift implementation of its recommendations.

In letters sent to the UK Secretary of State for Northern Ireland, the Office of the Taoiseach, and the Irish Department of Foreign Affairs, ENNHRI highlighted serious concerns regarding the NIHRC’s current and future financial situation. Due to these, the SCA was unable to re-accredit the NHRI with A-status, deferring its decision until 2022.

According to the UN Paris Principles and the SCA’s General Observations, NHRIs must receive appropriate funding to guarantee their independence, effectiveness, and ability to determine their priorities and activities.

Within its session report the SCA indicated that, in addition to exacerbating the NIHRC’s already fragile financial situation, proposed budget cuts would impact the NHRI’s ability to fulfil its core mandate under the UN Paris Principles.

In its letters, ENNHRI outlined a series of possible negative consequences of authorities not acting to solve current and future financial issues. Inaction may lead the SCA to recommend that the NIHRC be downgraded to a B-status NHRI in 2022. This would mean it is no longer fully compliant with the UN Paris Principles.

Finally, ENNHRI emphasised that open and constructive engagement between the NIHRC and the state is crucial to ensure that all budgetary issues are resolved quickly, appropriately, and in a sustainable manner.

ENNHRI remains available to further clarify the applicable standards and to cooperate on this issue.

» Read more on what ENNHRI does to support NHRIs under threat.