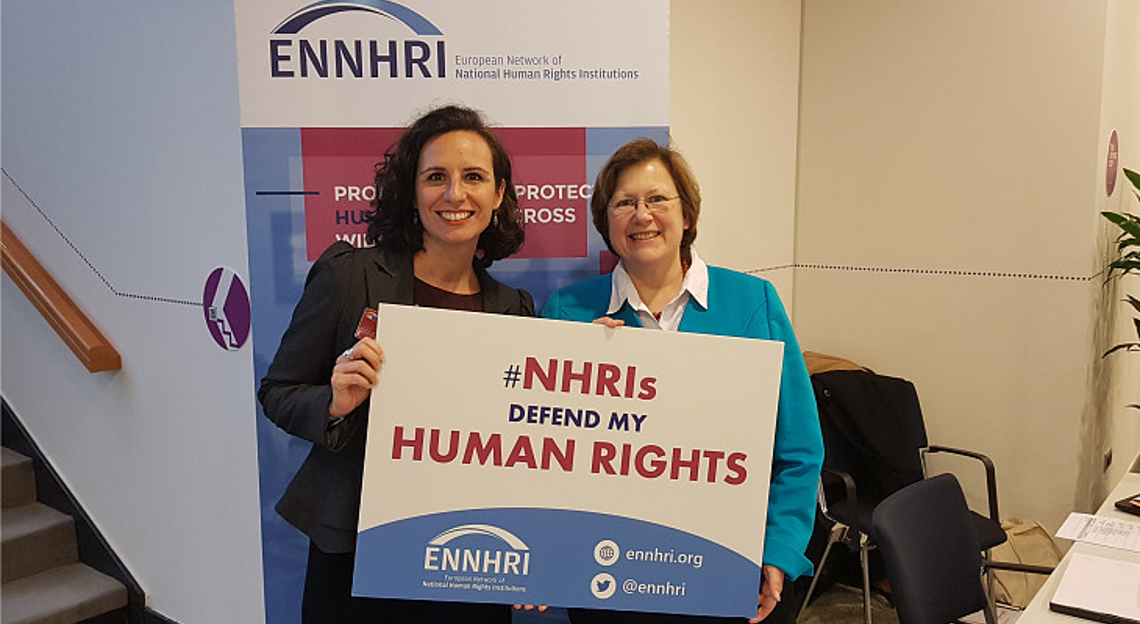 NHRIs represented during Human Rights Week at the European Parliament

The European Parliament hosted its first ever Human Rights Week from 19 to 22 November, commemorating the 70th anniversary of the Universal Declaration of Human Rights (UDHR). The role of NHRIs in promoting and protecting human rights was given visibility at a high-level conference and with the launch of ENNHRI’s Regional Action Plan for expanding and securing vibrant space for Human Rights Defenders.

Highlighting cooperation between NHRIs and the EU

On Tuesday 20 November, at the high-level conference commemorating the 70th anniversary of the UDHR, GANHRI Chair and ENNHRI Board member, Beate Rudolf, spoke about the important role that NHRIs play in the prevention and monitoring of human rights abuses and in reaching out to broader sections of society on human rights issues.

She emphasised that NHRIs are natural partners in helping the EU fulfil its commitment to human rights, pointing out that the important role of NHRIs has been recognised in the EU’s current Action Plan on Human Rights and Democracy, which has cooperation with NHRIs as its first action.

She also called for a stronger relationship between the EU and NHRIs, saying: “The participation of NHRIs could be further institutionalised for a deeper and more consistent approach to Human Rights Dialogues, the Universal Periodic Review and other processes”.

“To ensure that progress is not lost, we expect the new Action Plan on Human Rights and Democracy to include NHRIs and the Multiannual Financial Framework to recognise NHRIs as essential partners to support the EU’s rights and values, including the rule of law, human rights and democratic space”.

Rudolf spoke alongside a number of high-level human rights professionals, including representatives of the Council of Europe, Inter-American Commission on Human Rights and Inter-American Juridical Committee, the African Commission on Human and People’s Rights, the OSCE Office for Democratic Institutions and Human Rights and the Eel River Bar First Nation.

Throughout the week, ENNHRI Secretariat staff also gave visibility to the work of ENNHRI and European NHRIs towards European Parliament visitors and staff through a stall in the foyer. In particular, the stall put focus on ENNHRI’s regional action plan for expanding and securing vibrant space for Human Rights Defenders, designed to put into action the Marrakesh Declaration adopted in October by the Global Alliance of NHRIs. The action plan was also announced by Beate Rudolf in her address.

The plan will be revised following consultations with ENNHRI members and stakeholders and an updated version will be made available by the end of 2018.

Visitors at the stall were also invited to take an educational quiz about NHRIs and their work and take a photo with a sign reading: ‘NHRIs defend my human rights’.