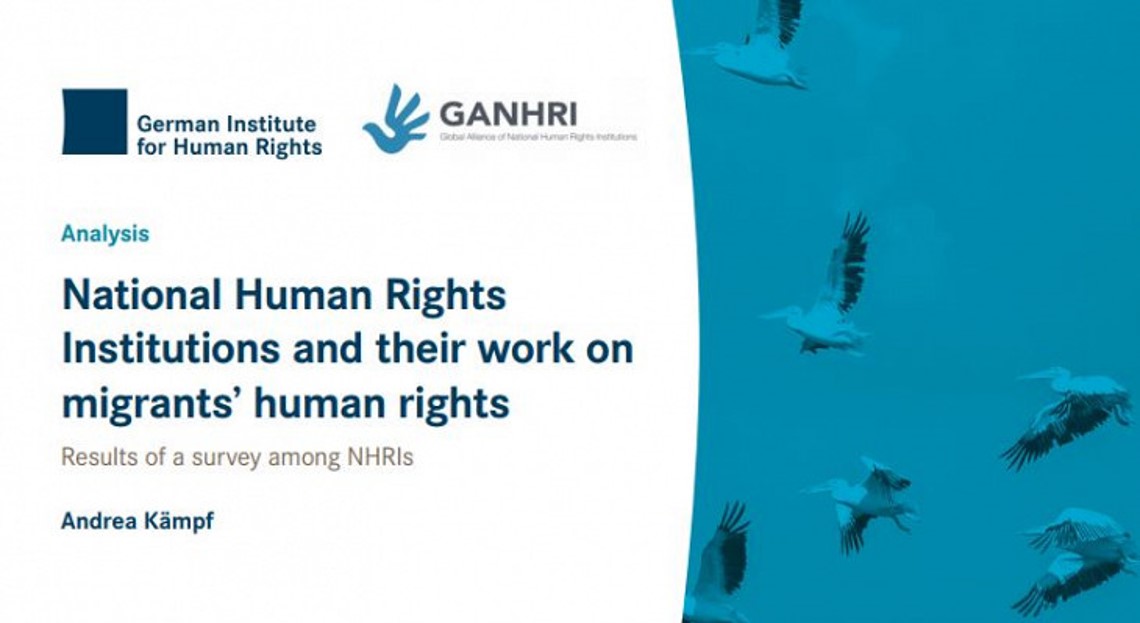 A new report about National Human Rights Institutions (NHRIs) and their work on migrants’ human rights has been produced by the German Institute for Human Rights on behalf of GANHRI, the Global Alliance of NHRIs. The report highlights examples of NHRIs’ work to promote and protect migrants’ rights, including several practices from Europe.

The report analyses the responses provided to a survey of NHRIs from around the world that was conducted in the summer of 2018. In the survey, NHRIs were asked about their priorities, methods and challenges related to migration. Of the (then) 110 NHRIs worldwide accredited as being in full or partial compliance with the UN Paris Principles, almost a third participated, including 12 ENNHRI members.

Main results of the survey are:

The report highlights examples of NHRIs’ work to promote and protect migrants’ rights, including specific cases of good practices from NHRIs in Portugal, Northern Ireland, Luxembourg, Germany and Slovenia, among others. It also presents the activities of the regional NHRI networks, including ENNHRI’s Asylum and Migration Working Group and our report on migrants’ access to information about their rights.

Several interesting regional and intra-regional trends are identified. For example, more than half of the NHRIs that participated in the study indicated that, for them, the detention of migrants – both adults and children – is the most pressing issue with respect to migrants’ rights. This is in line with the priorities of ENNHRI members, who monitor and report on the detention of migrants, often acting as the National Prevention Mechanism (NPM), and of ENNHRI’s Asylum and Migration Working Group. Also, compared with the other regions, ENNHRI’s members concentrate more on monitoring reception centre conditions, the compliance with human rights of status determination procedures and providing advice on migration policies in general.

The report found that most responding NHRIs focus more on the transit route and arrival conditions and comparatively less on the inclusion of migrants in the society. However, there are many good practices from European NHRIs, such as those in Armenia, the Netherlands and Portugal, which have worked on migrants’ access to social and economic rights.

The study asked NHRIs which activities they considered would be the most useful for improving their work on the topic. Among the responding ENNHRI members, the most popular proposed activity was training on migrants’ rights-related topics, followed by monitoring of cross border situations and the exchange of experiences with other NHRIs. Again, this demonstrates the added-value of ENNHRI’s Asylum and Migration Working Group and supports the working group’s priorities for 2019.

Compared with other regions, the European NHRIs were notable for being particularly active in engaging with the European human rights systems. This can be explained by the fact that, comparatively, Europe has a strong human rights institutional landscape and due to ENNHRI’s efforts in bridging European NHRIs to different European stakeholders, such as the European Union and the Council of Europe.

NHRIs were asked about the main challenges they faced in the field of migration. The European responding NHRIs cited as their biggest challenges: insufficient resources and a lack of means for NHRIs to ensure that their recommendations are acted upon. The increasing public resentment of migrants was the third greatest obstacle.