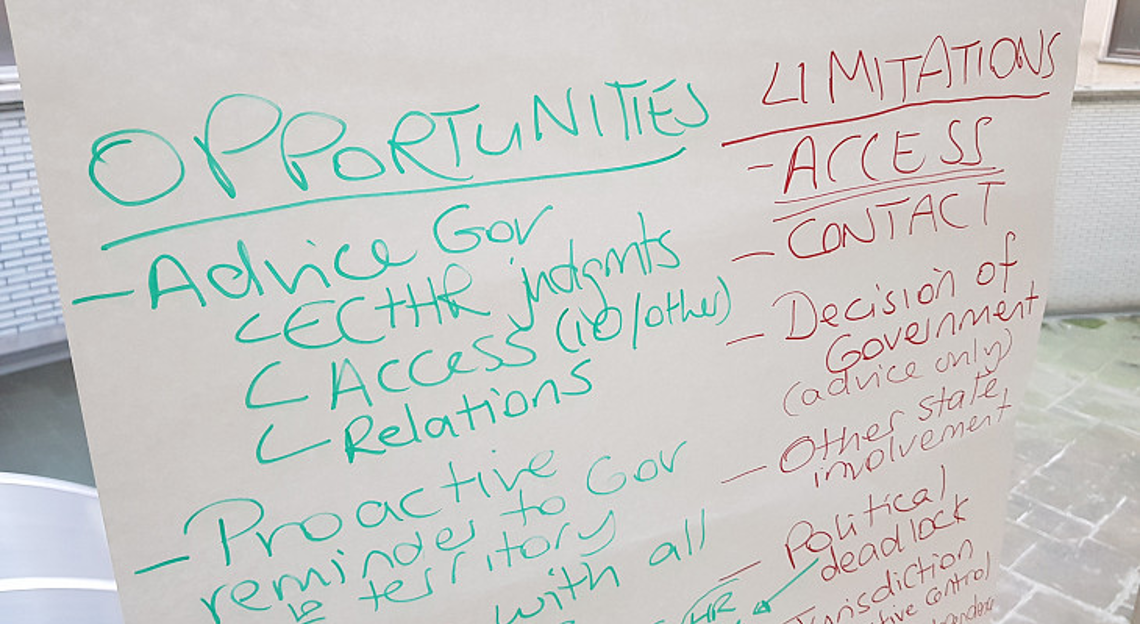 On 13-14 February, high-level representatives of National Human Rights Institutions (NHRIs) in Europe, international organisations and civil society came together in Brussels to discuss the roles and responsibilities of NHRIs in protecting and promoting human rights in non-government controlled areas in the region.

Organised within ENNHRI’s Project on the role of NHRIs in situations of (post-)conflict, the meeting was attended by all European NHRIs working in affected states, providing them a platform to share their experiences of engagement in non-government-controlled areas. Also in attendance were representatives of from the United Nations, Council of Europe, European Union and OSCE Office for Democratic Institutions and Human Rights.

The work to address human rights in such circumstances is challenging and sensitive. The human rights of individuals who live in non-government controlled territories are especially at risk given the lack of recognised democratic structures and direct connection to international protection mechanisms. Also important in these contexts are the cultural, ethnic, religious, political and other tensions at play and the protracted character of conflicts that often last decades.

There is often limited or no access to these areas, and the lack of trust between different sides of conflict and the risk of possible legitimisation of self-proclaimed authorities pose serious obstacles to any effective action.

As bodies acting independently from government and bridge-builders between the state, civil society and international organisations, NHRIs provide a vast potential to ensure greater respect for dignity for people in situations of conflict and post conflict. This is a role that has been gaining international acknowledgement.

During the meeting, participants exchanged practices and considerations of what the role of NHRIs should be in addressing human rights in such difficult contexts, in accordance with their broad human rights mandate and in line with the Paris Principles. The discussions helped participants, especially those from NHRIs, to identify concrete approaches for future work.

Cooperation with civil society and international and regional organisations was recognised as one of the most important elements for further engagement strategies. Participants expressed their interest and readiness to continue the exchange of practices and approaches to strengthen respect for human rights in these areas.