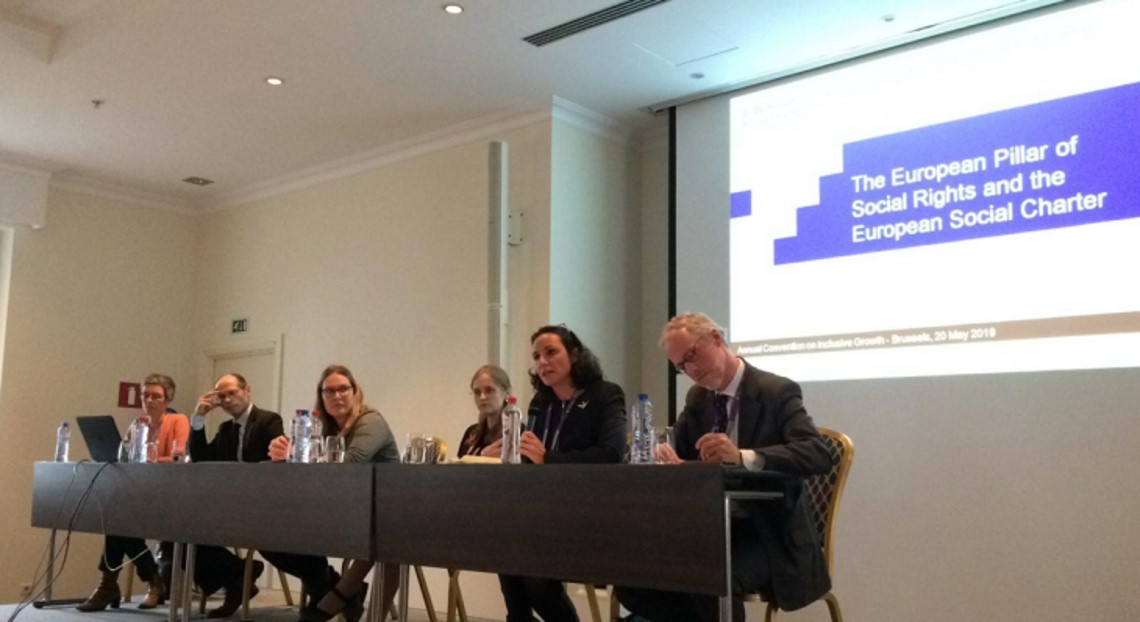 EU Annual Convention for Inclusive Growth 2019: side event explores the role of NHRIs and Equality Bodies in advancing social rights in Europe

On 20 May, on the sidelines of the EU Annual Convention for Inclusive Growth 2019, ENNHRI, together with the Council of Europe Department of European Social Charter and Equinet, held a side event on ‘Independent national defenders for a stronger social Europe post 2020’. The event focused on advancing sustainable development in the social area through synergies between the EU’s European Pillar of Social Rights (EPSR) and European Social Charter (ESC). There was an emphasis on the role of National Human Rights Institutions (NHRIs) and Equality Bodies in this context, particularly in the area of poverty.

Olivier de Schutter presented proposals from his study on how synergies between EU policies, including the EPSR, and the ESC can be built. Those proposals included:

Anete Ilves highlighted that the UN SDG framework (2030 Agenda), which adopts a human rights-based approach, can serve as an inspiration for the EU’s post-2020 strategy, such as in the field of how the strategy measures poverty.

Referring to ENNHRI’s recently-published summary on European NHRIs’ work on poverty, she emphasised that NHRIs are very well-placed to advocate nationally on ensuring a human rights-based approach to poverty reduction and measurement in line with the SDGs. For example, this could be done in SDG implementation plans, which some EU member states have adopted or plan to adopt.

Milla Vidina highlighted the key role of Equality Bodies in the protection, respect and fulfilment of economic and social rights embedded in the SDGs framework, stating that they are an essential instrument for synergies between the legal and policy frameworks of the EU, Council of Europe and the UN.

She presented the approach taken by the Equality Body (and NHRI) of Ireland (Irish Human Rights and Equality Commission) in handling the preparation of a collective complaint to the European Committee of Social Rights on the right to housing. The case study showed how an Equality Body used the mechanisms of the ESC to promote rights related to SDG 3 (health and wellbeing) and SDG 11 (sustainable cities and communities).

Veerle Stroobants presented the work of the Belgian Combat Poverty, Insecurity and Social Exclusion Service on evaluating the effectiveness of fundamental rights in situations of poverty. In particular, she emphasised the importance of involving people who themselves live in poverty through structural dialogue, suggesting that a collective approach involving people living in poverty and their organisations serves not only to encourage their emancipation but also to create more efficient policies aimed at tackling poverty.

ENNHRI, together with the Council of Europe and Equinet, are ready to continue dialogue with the EU towards a Europe where economic and social rights are a reality for everybody.

Learn more about ENNHRI’s work on economic and social rights: