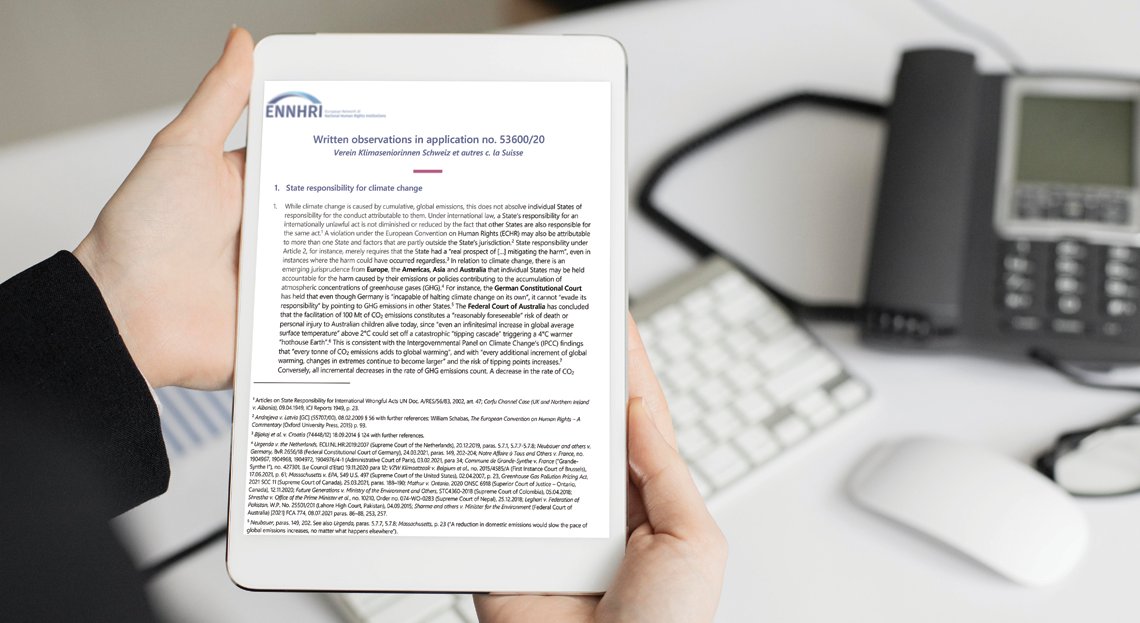 ENNHRI has submitted a third-party intervention to the European Court of Human Rights in the landmark climate case of Verein KlimaSeniorinnen Schweiz and others v. Switzerland. ENNHRI’s submission underlines states’ responsibility to combat climate change effectively in order to protect the right to life.

This is one of the first cases before the Court that raises the question of states’ positive obligations to limit the irreversible consequences of climate change in order to ensure the realisation of human rights standards established under the European Convention on Human Rights (ECHR).

The case has been brought by a group of older women and their association in Switzerland who allege that the state is not doing enough to cut greenhouse gas emissions. As a consequence, it is exposing them to life-threatening heatwaves in violation of the right to life and the right to private and family life enshrined in Articles 2 and 8 of the ECHR. The applicants also allege a violation of the right to a fair trial (Article 6) and the right to an effective remedy (Article 13), because the Swiss courts dismissed their claims on procedural grounds.

In the third-party intervention, ENNHRI argues that states are responsible under the ECHR for the risk of harm to life and health caused by their emissions. The submission invites the European Court of Human Rights to confirm the decisions from apex courts in Germany and the Netherlands, which have found that states are obligated to safeguard the right to life and physical integrity by cutting emissions to limit global warming.

Moreover, ENNHRI’s intervention highlights that both actual and potential victims of climate change consequences should be granted access to effective rights protection, especially in view of the fact that long-term climate harm may still be prevented. ENNHRI also asks the Court to recognise the independent right of associations under Article 13 of the ECHR to an effective domestic remedy in environmental matters.

The submission was developed under the lead of the Norwegian National Human Rights Institution, with support of a group of members from ENNHRI’s Legal Working Group and new Climate Core Group. The intervention built on information from ENNHRI members on climate change cases brought before their national courts, as well as ENNHRI’s paper on Climate Change and Human Rights in the European Context, developed in the context of the Duarte Case.

» Discover ENNHRI’s work on democracy and the rule of law.