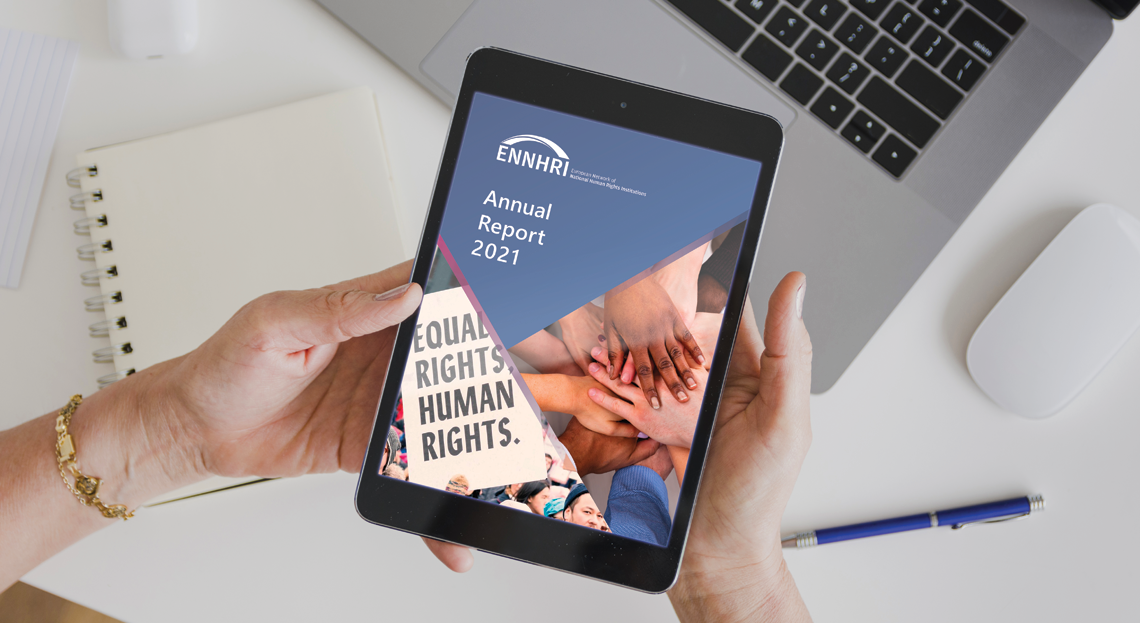 Last year, NHRIs again rose to the challenge of protecting and promoting human rights against the backdrop of COVID-19. Lockdowns and other restrictions continued to force changes in the support they could give rightsholders and to their working practices. Yet they adjusted. NHRIs’ wide-ranging achievements in these difficult circumstances – a testament to their flexibility and resilience – are captured in ENNHRI’s Annual Report 2021.

2021 was a year of great significance for ENNHRI. The final year of the strategic cycle 2018-2021, it was marked by major developments in NHRI recognition at the regional level.

The Council of Europe’s Recommendation on NHRIs, adopted in March 2021, was a milestone. Acknowledging NHRIs as pillars of the rule of law, human rights and democracy in Europe, it encourages Member States to establish, strengthen, and ensure an enabling environment for NHRIs. To capitalise on the momentum, a high-level meeting was held to explore avenues for strengthening NHRI and Council of Europe cooperation.

Another indication of this deepening relationship was a new online resource, developed with the Council of Europe, to support NHRIs in their work on the execution of European Court of Human Rights’ judgments.

Further EU engagement resulted in the recognition of NHRIs as key actors for the implementation of the Charter of Fundamental Rights by the Council of the European Union. Following this, ENNHRI organised an online seminar on the Charter’s role in the work of NHRIs together with the EU Agency for Fundamental Rights and Equinet.

Whenever called on, ENNHRI acted in support of NHRIs under threat. Actions for NHRIs in Armenia, Georgia, Northern Ireland, Poland, Ukraine, and Moldova included public statements, opinions, and open letters. But solidarity does not end at Europe’s borders. After the Taliban’s seizure of power, ENNHRI and its members advocated nationally and at the European level for the evacuation of Afghan human rights defenders at risk.

2021 also saw developments in NHRI establishment and accreditation. ENNHRI continued to support NHRIs undergoing the (re-)accreditation process: institutions in Ireland, Russia, Scotland and Serbia were re-accredited with A-status. Meanwhile, the wheels were set in motion for the establishment of NHRIs in Sweden and Iceland.

For the second year running, ENNHRI published a report on state the rule of law in Europe. Over 40 NHRIs provided their national perspectives, while the report also identified Europe-wide trends. Its successful dissemination prompted the European Parliament to call on the European Commission to consult more with NHRIs.

In the area of asylum and migration, ENNHRI released a regional report on the human rights of migrants at borders. Based on NHRI findings, it highlighted regional trends and gave recommendations for achieving human rights-sensitive governance at borders. Building on this, ENNHRI embarked on a new phase supporting NHRIs’ work on human rights accountability at borders. A report set out gaps identified by NHRIs in this area.

In recognition of the inextricable link between climate change and the enjoyment of human rights, ENNHRI members established a core group on the climate crisis. It published a paper on climate change and human rights and helped draft ENNHRI’s third-party intervention to the European Court of Human Rights in the landmark case Verein KlimaSeniorinnen Schweiz and others v. Switzerland.

COVID-19 placed substantial demands on NHRI leaders, as they guided their institutions through unprecedented times. To reflect on leadership lessons from this, ENNHRI organised its first Leadership Forum. This supported heads of institutions to understand and refine their roles and deepen their peer relationships.

The year concluded with a turn towards the future. At the General Assembly in December, ENNHRI’s Strategic Plan 2022-2025 was adopted and governance positions for the 2022-2025 strategic cycle elected, among them a new Chair and Board.

The network can reflect with pride on how it and the recognition, credibility, and visibility of NHRIs progressed from 2018-2021. With such a base in place and experience to draw on, it is in a strong position to develop further and respond to the challenges ahead.

What is certain is that NHRIs will be needed more than ever. ENNHRI will continue to support, strengthen and connect them to enhance the promotion and protection of human rights across Europe.