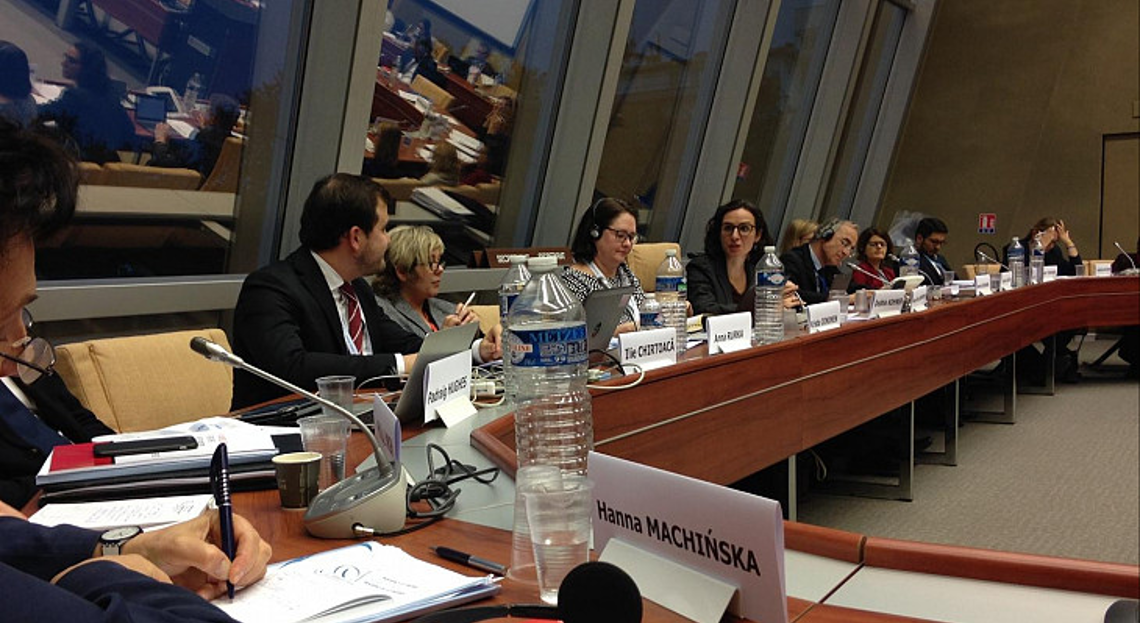 Updates on human rights developments at the Council of Europe

Last week, a number of workshops and events were held in Strasbourg centred around the 90th Plenary Meeting of the Council of Europe Steering Group for Human Rights (CDDH) on 27-30th November, in which ENNHRI staff actively participated. This article gives an overview of the important updates for NHRIs coming out of the meetings.

In the Recommendation, Council of Europe member states are recommended to ‘co-operate and seek assistance, when needed from the European Network of National Human Rights Institutions’ in relation to the establishment and strengthening of NHRIs in compliance with the Paris Principles.

At the CDDH workshop on the ‘Protection and promotion of the civil society space in Europe’ on 29th November, ENNHRI’s Secretary-General, Debbie Kohner, moderated a discussion in celebration of the adoption of the Recommendation. The Deputy Commissioner for Human Rights of Poland, Hanna Machinska, also raised awareness of the shrinking democratic space for NGOs in the country and recognised the importance of robust international standards, such as the Recommendation.

Twentieth anniversary of the European Court of Human Rights

Special attention went out to the European Court of Human Rights (ECtHR) which is celebrating its twentieth anniversary and has undergone important reforms since its inception. Marking the anniversary, a seminar was organised by the Finnish Presidency of the Council of Europe as well as a meeting by the Open Society Justice Initiative. Participants at the meetings concluded that, despite the challenges, the ECtHR fulfils a frontrunner role in Europe and the world.

Through its Legal Working Group, ENNRHI will continue to closely follow CDDH work related to the ECtHR and speak up for a strong and independent court (e.g. see ENNHRI’s contribution to the Copenhagen Declaration).

Another topic addressed that is of particular relevance to European NHRIs is the work to be started by CDDH in 2019 on ‘appropriate standards for the reception and accommodation of refugee and migrant children and/or Guidelines on alternatives to immigration detention’ (CDDH MIG).

ENNHRI’s Asylum and Migration Working Group is active on this topic. At the most recent Working Group meeting in November, Working Group members discussed paying particular attention in 2019 to the human rights situation of migrants at the borders, issues with regard to immigration detention and the need to engage with relevant European stakeholders on policy and legislative developments in this field, including the Council of Europe.

The CDDH also considered the draft Additional Protocol concerning the protection of human rights and dignity of persons with mental disorder with regard to involuntary placement and involuntary treatment (‘Oviedo Convention’). While stressing the exceptionality of such measures, CDDH leaves it up to the DH-BIO to determine, ‘taking into consideration the comments received during the public consultation, when and under which conditions to resume the work on the Additional Protocol’.

ENNHRI’s CRPD Working Group recently submitted a statement on the draft Additional Protocol and will continue to follow up on the process.

ENNHRI was specifically thanked for its input to and engagement with CDDH in connection to business and human rights. The follow-up of the Committee of Ministers Recommendation remains on the agenda of CDDH also in the next few years, and ENNHRI’s Business and Human Rights Working Group will remain an important counterpart for the Council of Europe in the follow-up process.