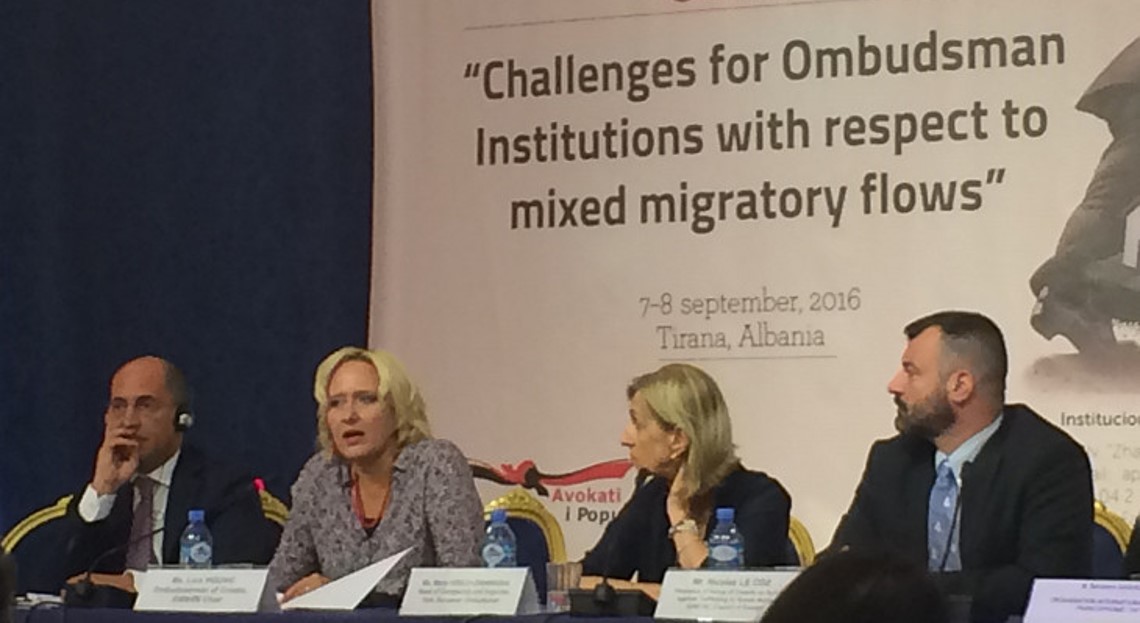 Ombudsman, NHRIs and Equality bodies must contribute to creating a culture of co-existence, said Lora Vidović, Ombudswoman of Croatia and Chair of ENNHRI, speaking at a conference in Tirana on the challenges that Ombudsman Institutions are confronted within the context of the recent migration issues.

Representatives of Ombudsman Institutions from across the world gathered on 7 and 8 September in Tirana, Albania, to discuss the current challenges posed by the recent refugee and migrant flows and find a common response to the situation of people in need of international protection.

ENNHRI Secretary General, Debbie Kohner, the co-chair of ENNHRI’s Working Group on Asylum and Migration, Adriana van Dooijeweert and other ENNHRI members participated in the event, alongside high level representatives of international organisations and agencies, government authorities and the civil society.

“Combating hate speech and negative stereotyping, as well as other manifestations of intolerance, racism and xenophobia – ranging from discrimination and hate speech to hate crime – is an integral part of the work that Ombudsman and other National Human Rights Institutions (NHRIs) are doing to promote and protect human rights“, said Vidović.

She further highlighting that, within ENNHRI many of the members have done significant work on combatting negative stereotyiping and hate speech, through their monitoring, and reporting work, such as the French Commission (CNCDH) which in its annual report on combatting racism, anti-Semitism and xenophobia is monitoring and analysing the actions of the public authorities and formulates recommendations to help them fight against this phenomena, but also through complaints handling and legal action. The latter is the case of the Belgian NHRI, UNIA, which handled an increased number of complaints during the past year. Several NHRIs are also working on projects to identify and prevent hate speech on the internet.

“As independent institutions, endowed with the responsibility to promote and defend human rights we need to send a strong and unambiguous message that the idea of hatred and discrimination is not acceptable“, concluded Vidović.

The importance of a collective response and of cooperation among NHRIs, Parliaments, Ombudsman institutions and other relevant stakeholders, was emphasised in the speech Ombudswoman Vidović delivered on behalf of the Global Alliance of National Human Rights Institutions (GANHRI) on the second conference day. She reminded how, among other steps, NHRI’s affirmed their intention to turn law and policy makers’ attention towards protection measures for the most vulnerable among migrants, refugees and asylum seekers.

The conference, hosted by the People’s Advocate (Ombudsman) of Albania, was jointly organised by the Association of Mediterranean Ombudsmen (AOM), Association of Francophone Ombudsmen and Mediators (AOMF), the International Ombudsman Institute (IOI) and the Ibero-American federation of Ombudsman.