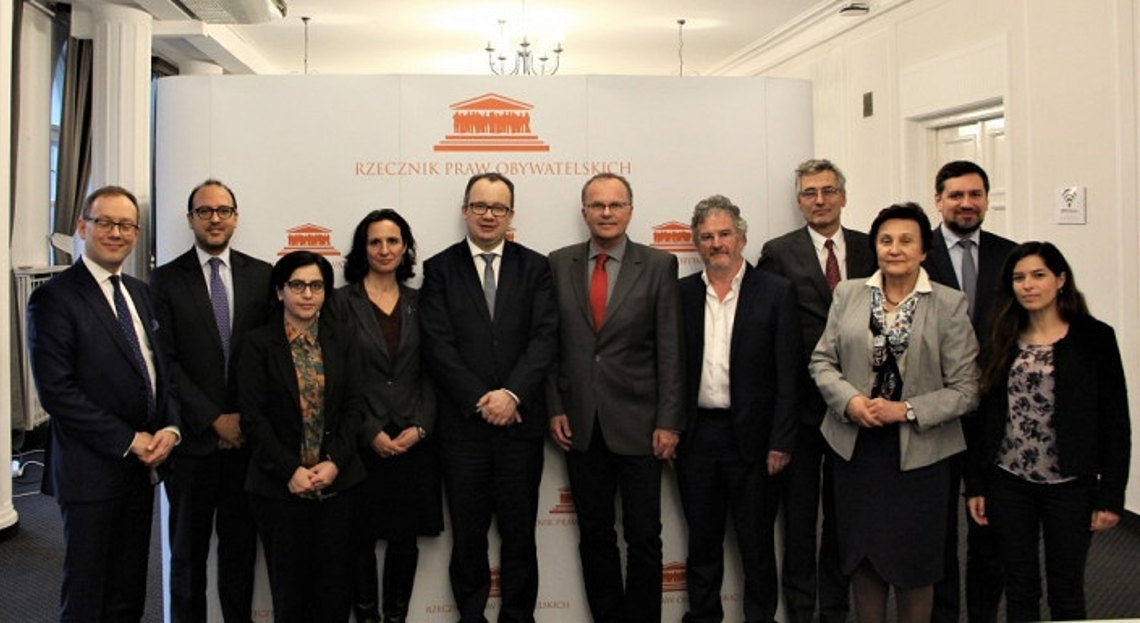 International and regional actors met with the office of the Polish Commissioner for Human Rights, Dr Adam Bodnar, on Monday, 25 March in Warsaw, expressing their solidarity and support in light of the recent civil action brought against the Commissioner by a public television station.

They expressed a commitment to act in support of the Commissioner, who has consistently spoken up for the protection of the rule of law and judicial independence in Poland throughout his mandate.

Participants raised their concern that the lawsuit was filed against the Commissioner as a private individual for a statement made in his professional capacity, making reference to the joint statement (available in Polish) released in February by ENNHRI and GANHRI, which pointed out that such civil action is inconsistent with Poland’s international commitments to protect institutional independence of the Commissioner who has a constitutional mandate to speak up for human rights in Poland. Under the UN Paris Principles, the decision-making body and staff of a National Human Rights Institution (NHRI), such as the Commissioner’s office, must have functional immunity.

There was also emphasis placed on the importance of additional budget being provided for the Commissioner’s office to correspond to its additional mandate to manage exceptional complaints. An adequate budget was underlined as crucial for the effective fulfillment of the Commissioner’s mandate and is a requirement under the Paris Principles.

The meeting was followed the next day by a press briefing on the recent adoption of the Principles on the Protection and Promotion of the Ombudsman Institution (Venice Principles) by the European Commission for Democracy Through Law, which also includes a provision on functional immunity for deputies and decision-making staff of Ombuds institutions.

At the press briefing, ENNHRI’s Secretary-General, Debbie Kohner, stressed the importance of independence in both the Venice Principles and Paris Principles and pointed out the negative reputational impacts for the Polish government if it does not respect the international standards applicable to the Commissioner.

“In order to fulfill its mission, the Commissioner must be free to speak on issues related to human rights,” she said.

She further added: “We are worried that the scope of the responsibilities of the Commissioner’s office has been significantly increased and therefore we recommend increasing the budget of the Commissioner in line with the increase in duties”.