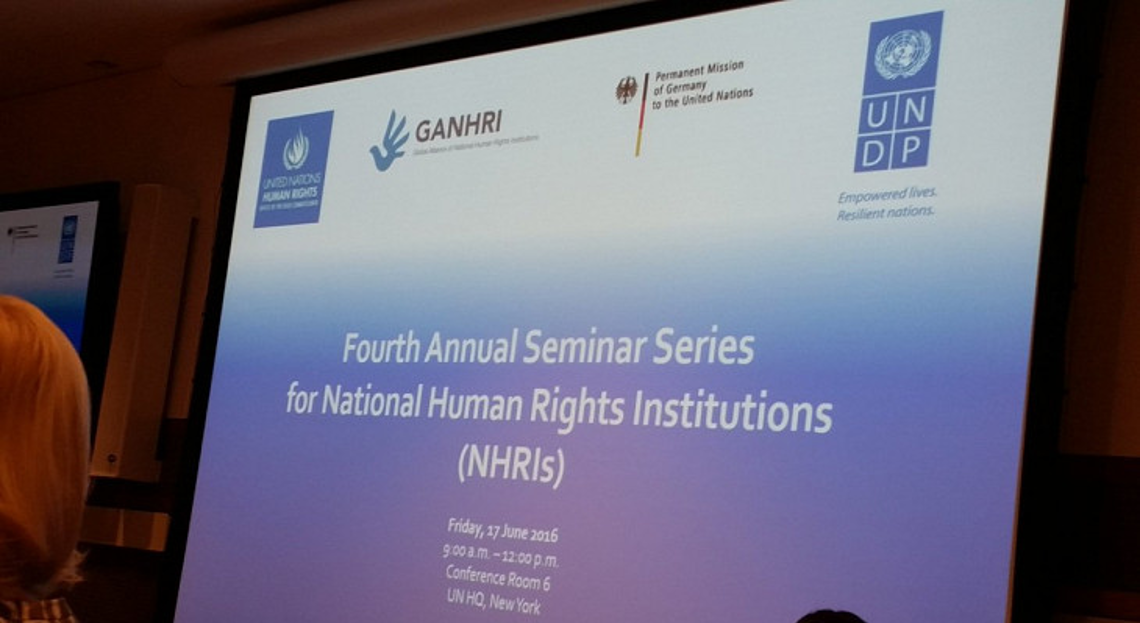 The 4th Annual Seminar on National Human Rights Institutions (NHRIs) took place in New York on 17 June and emphasized the vital role of NHRIs in preventing conflict and sustaining peace, building on the 2015 Kyiv Declaration on the role of NHRIs in conflict and their contribution towards promoting peaceful, just and inclusive societies as part of the sustainable development goals (SDGs).

The seminar was organized by the Global Alliance of National Human Rights Institutions (GANHRI) alongside UNDP and OHCHR and co-sponsored by the Permanent Mission of the Republic of Germany to UN.

In its keynote address, H.E. UN Deputy Secretary-General Jan Eliasson noted that “sustainable development and sustainable peace are interlinked, and that neither development nor peace can be achieved without respect of human rights, the rule of law and the building of strong and accountable institutions”.

Furthermore, “as central actors at the national level, NHRIs have a critical role by concretely and on the ground addressing human rights violations and preventing them in the first place, if and when possible.”

Mr. Magdy Martínez-Solimán, UNDP Assistant Secretary-General restated support for NHRIs work to promote and protect human rights in every context, including during and following conflicts.

“NHRIs play a vital role in efforts to prevent conflict and to build and sustain peace in often challenging environments and themselves regularly face challenges that include threats of reprisals. They assume an exceptional function: promoting the mitigation of tensions, and supporting responses that are inclusive and that advance social cohesion through advocacy and outreach to the most marginalized. Such institutions may also monitor, investigate and document abuses, all of which can be vital in contributing to early warning.”

ENNHRI Chair: SDGs are very much relevant for the work of NHRIs

Speaking at the event, ENNHRI Chair, Croatian Ombudswoman Lora Vidović, emphasized how effective, accountable, inclusive and independent NHRIs contribute towards achieving SDGs’ targets throughout the wider European region. “Considering NHRIs broad mandate, it is fair to say that all SDGs are very much relevant for their work. In order to achieve the targets of the other goals, we need peaceful and inclusive societies, access to justice for all and the establishment of effective, accountable and inclusive institutions at all levels”, said Vidović.

Participants in the event included representatives of Member States, UN bodies, funds and programmes, GANHRI, NHRI regional networks, NHRIs operating in conflict and post-conflict contexts, civil society and academics. They shared good practices and discussed critical issues and challenges faced by NHRIs as they operate in these difficult contexts. The seminar also identified opportunities to strengthen the capacity of NHRIs to implement the Kyiv Declaration including in situations where NHRIs are at risk of threats and reprisals. ENNHRI is currently in the process of planning a region-wide project on the role of NHRIs in situations of conflict and post-conflict.