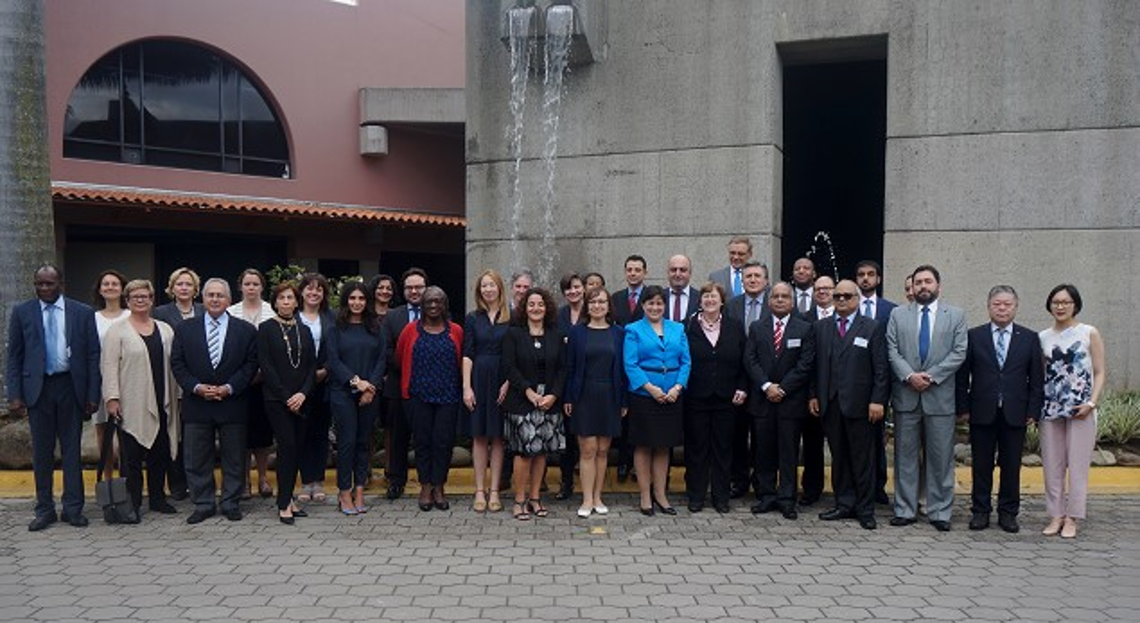 The Bureau of GANHRI, the Global Network of NHRIs, met in Costa Rica on 1 and 3 November 2017 to review developments and progress made since its last meeting in March 2017, and outline the way forward for the organization.

Hosted by the Ombudswoman of Costa Rica (Defensoria de los Habitantes of Costa Rica), the representatives of NHRIs adopted an ambitious roadmap for activities in 2018, whilst expressing concern at global trend of shrinking democratic space.

Ana Helena Chacón, Vice President of the Republic of Costa Rica and Acting Minister of Foreign Affairs Alejandro Solano addressed the ceremony preceding the opening of the Bureau meeting. Representatives of OHCHR and UNDP also attended the meeting.

The GANHRI priorities for 2018 will include: conflict and post-conflict issues; shrinking democratic space and human rights defenders; business and human rights; combating gender-based discrimination; the rights of older persons; the rights of persons with disabilities; refugees, migrants and IDPs; and the Sustainable Development Goals.

ENNHRI Chair, Lora Vidovic, presented the developments in the European region, and ENNHRI’s activities in 2017. She highlighted the key human rights challenges that European NHRIs are confronted with in the areas of asylum and migration; economic, social and cultural rights; as well as the shrinking democratic space in Europe.

Participants at the meeting reviewed the alarming trends, present in all regions of the world, of shrinking democratic space and reprisals, threats and other acts of intimidation against human rights defenders and NHRIs. They highlighted that, in a number of countries around the globe, NHRIs face threats and reprisals for their work to promote and protect fundamental rights and for holding governments to account for their international human rights obligations, in accordance with their legal human rights mandate. The meeting reviewed cases of reprisals and examined the role of GANHRI and its regional networks, OHCHR, UNDP and others to support NHRIs under threat and to promote their independence.

“Reprisals against human rights defenders, including NHRIs, are unacceptable and must be addressed to protect the work of human rights defenders and the integrity and independence of NHRIs. As global alliance of NHRIs, our role is to mobilise support for members facing such threats, and to stress to governments the need for NHRIs to perform their duties with independence and impartiality, without interference” said GANHRI Chairperson Prof Dr Beate Rudolf.

Against this backdrop the Bureau recommended that the theme of the 13th International Conference of the Global Alliance of NHRIs, to be held in late 2018 in Africa, is on the role of NHRIs in addressing shrinking democratic space and protecting human rights defenders.

The Bureau will meet again during the GANHRI Annual Meeting, to be held from 21 to 23 February 2018 in Geneva.