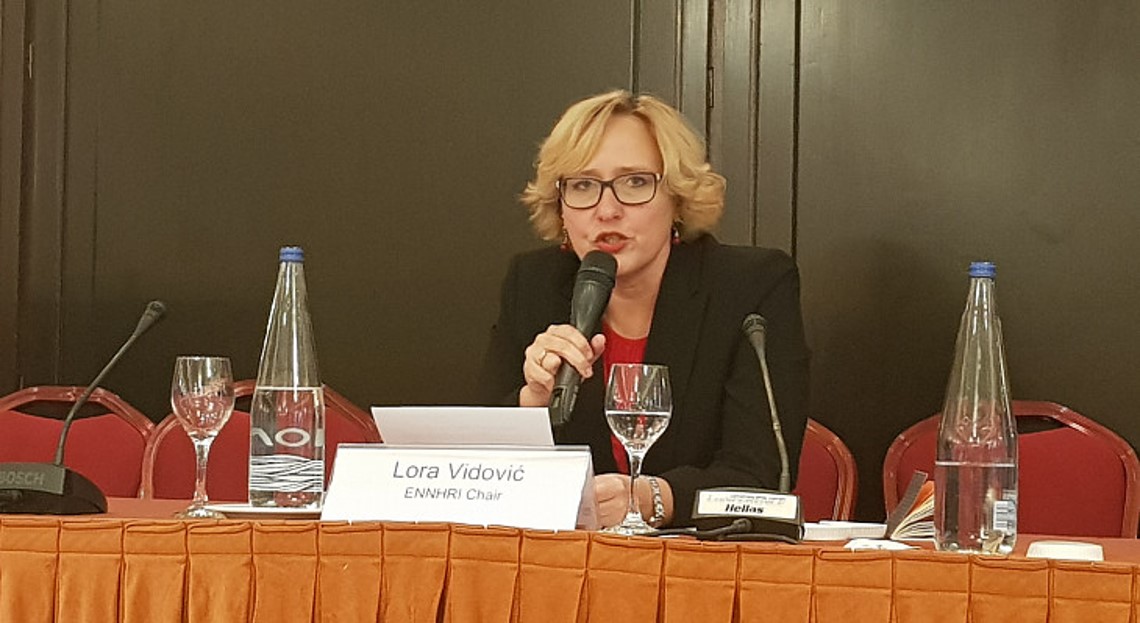 ENNHRI Chair delivers statement at the conclusion of Annual Conference in Athens, Greece

On 24 and 25 October 2018, 40 ENNHRI members gathered in Athens for their General Assembly Meeting and Annual Conference on enabling Human Rights and Democratic Space in Europe.

During these two days NHRIs expressed strong concerns on the rise of hostility against human rights and on the challenges to democratic principles across Europe. NHRIs increasingly witness and testimony a wide range of worrying trends across European countries, including:

The crucial role of NHRIs to address these concerns was emphasised by participants, including representatives from the UN, OSCE/ODIHR, Council of Europe, EU and civil society. NHRIs provide a bridge between individuals, civil society organisations, state actors and international organisations to ensure the promotion and protection of human rights and their defenders. The enduring pressure on the rule of law necessitates that all relevant actors support each other and act strongly together in the spirit of solidarity, justice and fairness. We must all strive to create spaces for dialogue, joint initiatives and new partnerships.

NHRIs provide a strong voice to promote and protect human rights for all, ensuring that no one is left behind. The challenging environment that human rights defenders currently face also requires efforts to communicate human rights effectively to all actors, and not only those who are already engaged, by showing that human rights ultimately concern us all. NHRIs work on the local level, and give a human face to human rights. They give rights holders an official public platform to raise matters that concern them, and a direct channel to state and international actors.

As human rights defenders themselves, NHRIs can also come under threat, including through funding cuts, reduction in formal independence, arrests and even attacks against NHRI staff members. Through ENNHRI, NHRIs under threat can find support in the collective voice of ENNHRI members, and in partnership with international organisations and civil society.

Our discussions in Athens clearly show that NHRIs are ready to stand together, in cooperation with diverse actors at all levels, to strengthen our common work to support the rule of law, democracy and human rights in wider Europe. ENNHRI is committed to acting upon the concrete proposals put forwards in Athens, which will be formalised in an Regional Action Plan for the Marrakesh Declaration, to support democratic space and human rights defenders across Europe.