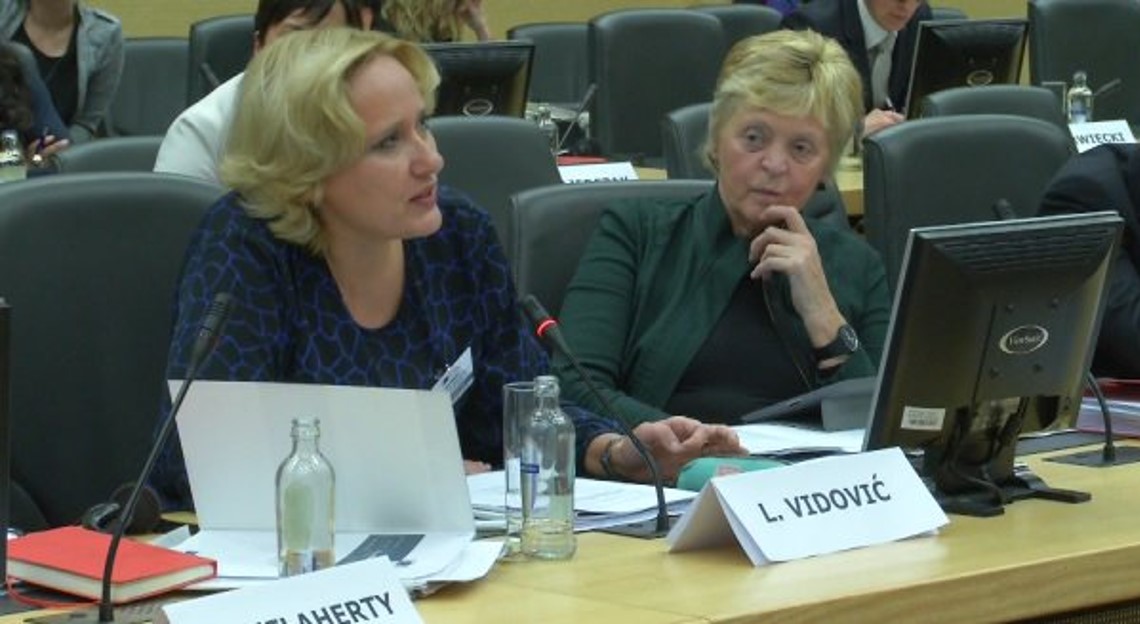 ENNHRI Chair, Lora Vidović, and Julie Lejeune, ENNHRI Legal Policy Officer, attended on 17 and 18 November the Annual Colloquium on Fundamental Rights organised by the European Commission. This years’ event focused on “Media Pluralism and Democracy” and addressed freedom, independence and pluralism in the media as a key component of an open and democratic European public space.

In the plenary session that took place on 17 November, First Vice-President Frans Timmermans, Commissioner Günther Oettinger, and Commissioner Jourová lead discussions with a wide range of experts on the key role in democratic societies of a free and pluralist media, and in particular digital media.

Media and journalists – key partners for NHRIs in Europe

During the session “An independent media, free from political and commercial pressures”, Lora Vidović stressed that, through their functions, NHRIs are actively working on the freedom and independence of the media. Vidović mentioned how NHRIs and Equality bodies use individual complaints received from journalists and media actors as well as their monitoring, reporting and advisory mandates to ensure that the right to freedom of expression is respected.

“As Chair of ENNHRI, network that brings together 40 NHRIs from across Europe, I increasingly hear reports of the restriction of free media in other European states, and I hope this Colloquium will help address this trend”, said Vidović.

On 18 November the Colloquium brought together, in several roundtable discussion, representatives of EU institutions, Member States, NGOs, journalists and media associations and academia to reflect on a wide range of topics such as: the role of media and ethical journalism in promoting fundamental rights, protecting journalists’ freedom of expression, protecting and supporting journalists against threats and hatred and ensuring the existence of an independent media, free from political and commercial pressures.

On the second day, as part of the session on „Protecting journalists and new media actors from hate speech“, Vidović emphasised that NHRIs work to raise public awareness on human rights is also crucial for promoting a culture where hate speech is not accepted. She mentioned the importance of political will to better regulate and implement freedom of expression, as well as the need to educate the public, including the politicians, in this area.

Participants also remarked the important technological changes that have occurred during the past years and the role of the new communication tools, which created a major cultural shift in the use and the production of information.

NHRIs use their functions to help support media freedom

NHRIs act as a bridge between civil society and the state, and between the national and international arenas, and have actively used these functions to help support freedom of the media. More specifically, NHRIs are:

ENNHRI’s recent work is closely connected with the challenges discussed at the Colloquium. On 15 December ENNHRI and Council of Europe co-organize a Seminar on Freedom of expression, focusing on the role and powers of National Human Rights Institutions (NHRIs) and other national mechanisms.