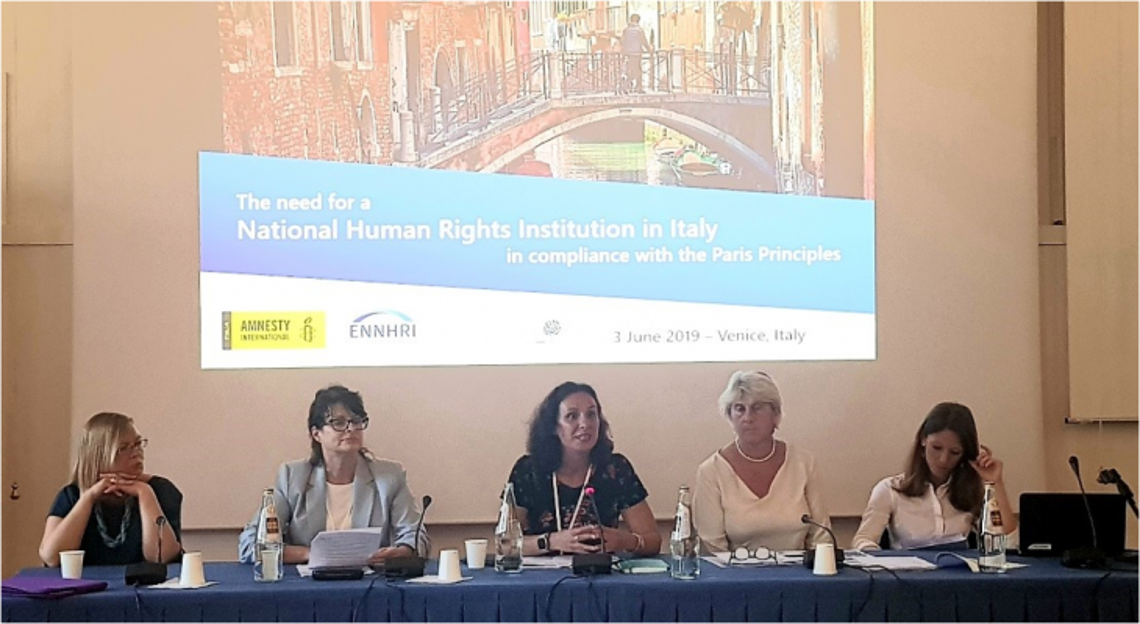 Italy is currently one of the last two EU member states without a National Human Rights Institution (NHRI). To explore the steps ahead in realising the establishment of an Italian NHRI, representatives from Italian civil society, European NHRIs and regional organisations gathered at the Global Campus for Human Rights in Venice on 3 June for a roundtable event, co-organised by ENNHRI and Amnesty International Italy.

The panellists and audience addressed the need for the emergence of a human rights culture in Italy. There was a call for more coordination and cooperation among Italian human rights stakeholders, across civil society as well as from existing public institutions such as the regional ombuds offices in Italy, the National Preventive Mechanism and the Equality Body.

“In Italian cultural and political society in 2019, it is first necessary to highlight to citizens the strategic role that an NHRI could have”, said Giulia Groppi from Amnesty International Italy. “In a time of poverty of human rights in Italy, it is important to raise the debate in civil society even before among the institutions that have to translate it into reality.”

Adding to these comments, Barbara Terenzi from the Human Rights Promotion and Protection Committee said: “Italy urgently needs an NHRI, as a coordinated human rights promotion and protection strategy at a national level is fundamental. This is especially considering the people arriving from disrupted parts of the world, second-generation third-country nationals and the complex and difficult situation concerning Roma, Sinti and Travellers, and many Italian citizens.”

Unlike previous legislative initiatives to establish an NHRI in Italy, the current initiative was praised by the civil society participants for its greater respect for the UN Paris Principles, including the requirement of pluralism. They pointed out that the next step forward would be to table a debate on the draft law in the Italian parliament.

Representatives of regional organisations expressed their support. ENNHRI’s Chair, Emily Logan from the Irish NHRI (Irish Human Rights and Equality Commission), emphasised that they are “not alone” in their endeavour, underlining that NHRIs across Europe, through ENNHRI, are willing and well-placed to provide support. More specifically, ENNHRI can offer expertise in the process of NHRI establishment and accreditation, unique insights into the application of the UN Paris Principles, and examples of strong legislative underpinnings for an NHRI.

Moreover, Katarzyna Gardapkhadze from the OSCE Office for Democratic Institutions and Human Rights referred to the legal opinions provided by her organisation on draft laws, including laws on the establishment of NHRIs. Eva Sobotka from the EU Agency for Fundamental Rights mentioned the agency’s forthcoming study on NHRIs, which will provide an overview of the NHRI landscape across EU member states and serve as a tool for member states when establishing and strengthening NHRIs.

In January, ENNHRI’s Senior Human Rights Officer, Dr Katrien Meuwissen, presented at an event in the Italian Chamber of Deputies the case for an Italian NHRI, underlining the importance of such an institution and how it would differ from other existing national mechanisms in Italy. She highlighted to the audience, which included a number of Italian senators and house members, that ENNHRI can provide technical feedback on draft laws and good practice examples from across its wide membership.